Calling To Action And Filling The Gaps 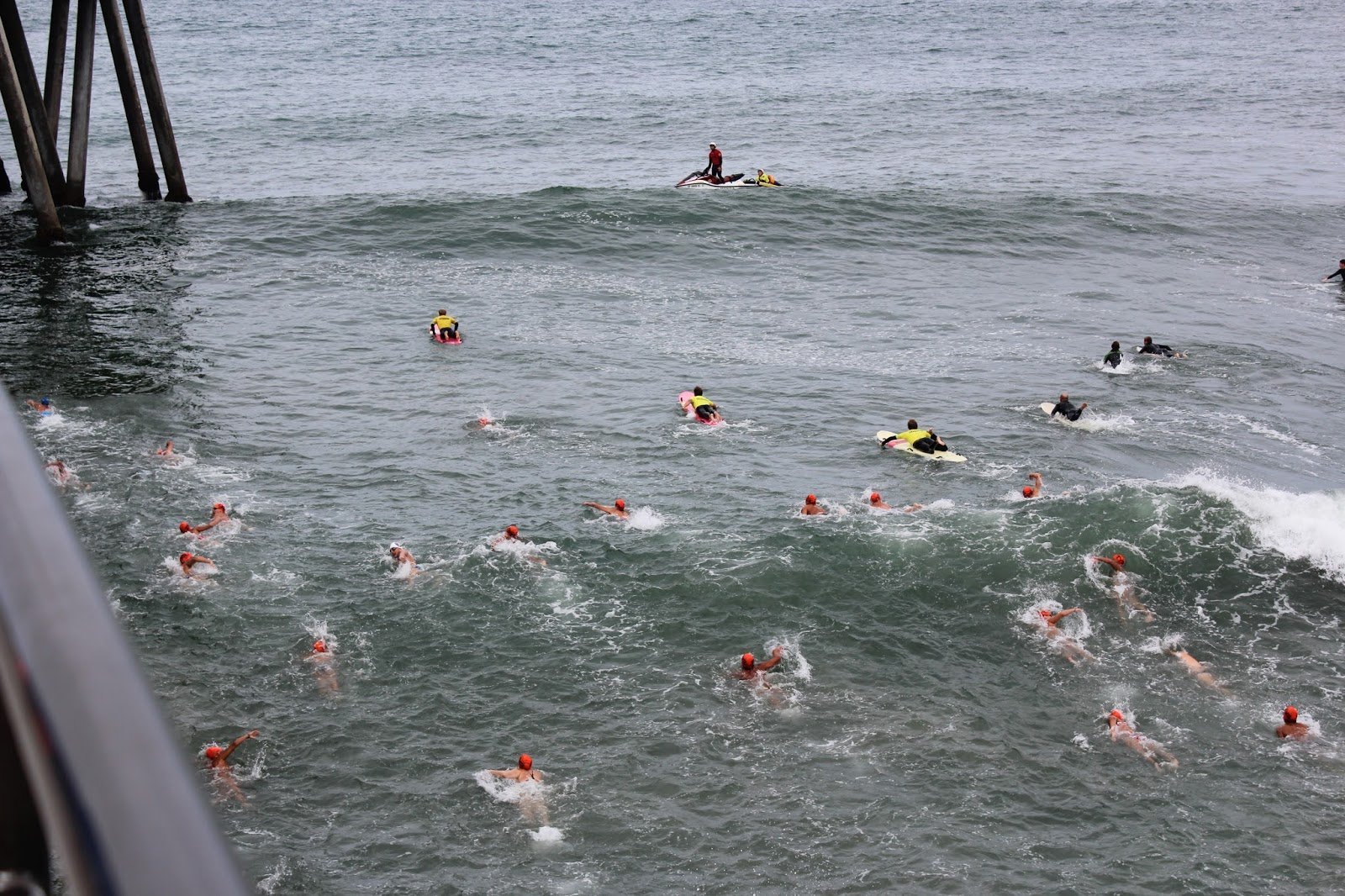 It is a fact that swimmers are often the first responder in open water swims when there is a distressed swimmer on the course.

Although safety personnel, lifeguards, officials, and volunteers create a safety net on the course as they keep eyes on the swimmers, there are occasionally miscues and oversights when the swimmers themselves help others before lifeguards come to the rescue.

Commander Robert Esson of the Los Angeles County Sheriff’s Department was one of those first responders at the 2014 Huntington Beach Pier Swim.

“I found myself involved in assisting on the rescue of the lady who was attempting to compete in the race, but a few hundred yards offshore she panicked and about to go under,” the retired sheriff described the situation. “I swam back in from a point just passed the bait house, and decided not to round the pier, thinking I had cracked ribs from the panicked lady kicking me.”

After the Commander responded to the immediate needs of the distressed swimmer as others swam by them, he next turned his attention to drawing the attention of the lifeguards as they quickly effected the rescue and evacuation back to shore. “The Huntington Beach marine safety officers and lifeguards were the true heroes. All I did was lend a voice and an arm to rest on. I pulled her a bit into safer water, and let her hold my arm as I was yelling loudly and waving at the guards for their response. I was [only] a small part of any help.”

But that quick action and quick thinking made a big difference on that day.

“Upon seeing my gesture to them, the lifeguards moved with great alacrity and provided respite to the panicked competitor on the rescue board attached to their Jet Ski. They handled the situation with calm demeanor and facilitated the rescue with the utmost of professionalism.”

After 31 years on the job as a street-hardened, gently compassionate public safety officer, Commander Esson found that service to others has rewards often unspoken. That innermost pride and satisfaction are things that open water swimmers profoundly appreciate after making a rescue of another person.

Those swimmers who come to the aid of others often wonder why their fellow competitors either did not see what they saw or chose to swim right pass an individual in distress. “While on that day, I was angry at myself for not just finishing, I think I was most upset by the men and women who swam around or even over that lady as she screamed for help. [But in this sport] there are some great folks who have at one time already been called to action in one form or another wherein they filled the gap for another.

There are various levels of a safety net in open water swimming races. At the highest level, there are the race organization’s safety personnel, lifeguards, and officials on the water. There are also volunteers, either on the water or spotters and communications specialists on dryland. But the most pervasive safety net in a race are one’s fellow swimmers.

“There is a lot that demands 100% awareness in the open water,” describes waterman Bruckner Chase. “The top of that list is your fellow swimmers. Rule of the sea and the rule of the open water swimmer: assist those in need to the best of your ability. If you are in doubt of that ability? Yell and get the attention of others who have the training and equipment to respond.”

The eyes and ears of any event’s safety personnel are always augmented by the swimmers themselves. The larger the swim, the more helpful swimmers can be for their fellow swimmers.

“In the spirit of helping others and doing the right thing, we always encourage swimmers – however competitive – to look around at their fellow athletes during their races especially during large mass participation swim,” says former lifeguard Steven Munatones. “If you see something, do something. Stop and swim over to the swimmer. Ask if they are OK. If they are in obvious distress, swim up behind them. If you are strong enough, initiate the rescue. If you are not strong enough to make a rescue, stop a fellow swimmer who might be. Do not swim around or ignore a swimmer in need. Lend a hand, lend a shoulder, or lend your voice at the very least. Yell out for help and attract attention to help resolve the problem.”

A swimmer in need is a friend indeed.