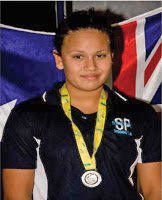 The event, organized by Cambodia’s Ministry of Tourism, is in celebration of the beach resort’s recent induction into the Most Beautiful Bays in the World Club.

The 5K open water swim will be showcased along with beach volleyball, sand wrestling, Khmer kickboxing, Bokator, Jet-ski racing, a 5K fun run, a fair and a music concert.

And Cambodia may have a strong female representative in future international competitions. Bethany Robertson is a 16-year-old student in Melbourne who wishes to represent her ancestral homeland rather than her country of residence. Born to a Cambodian mother and Australian father, Bethany has participated in dozens of open water swims whose father John is the President of Surrey Park Swimming Club where Bethany trains.

Cambodia’s National Olympic Committee Secretary General Vath Chamroeun was quoted that he was delighted to have more foreign based Cambodian athletes willing to represent the country. “We welcome Khmer athletes based abroad if they meet the standard expected of them. We have to check her records against the top athletes at the last SEA Games and if she has good timing, we would be happy to invite her.” Secretary General of Cambodian Swimming Federation Hem Thon sees Bethany’s immediate potential impact on the sport in Cambodia and abroad. “Her personal best in the long distance could have earned her a gold in the last SEA Games.” On the competitive Australian open water swimming scene,Bethany has proven herself finishing first in both the 5K and 10K races for U16 Girls at the 2011 Australian Open Water Championships.