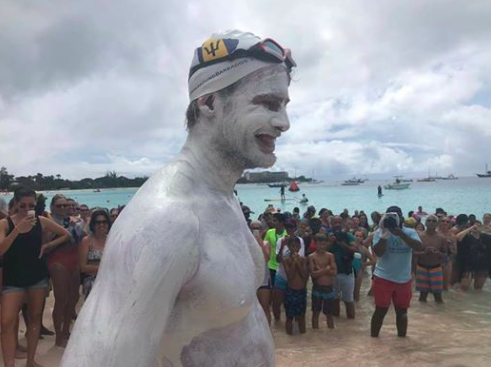 Cameron Bellamy has had quite a year.

First he became the first South African to complete the Oceans Seven. Then he attempted a Swim Around Barbados. He did not finish his first attempt in September when he swam for over 27 hours and 66 km, but he vowed to return.

But today, he realized his goal and became the first individual to complete a 96.4 circumnavigation swim around the tropical island in the Caribbean Sea.

Kristina Evelyn of the Barbados Open Water Festival reported, “Cam has done it. He has become the first person ever to #SwimAroundBarbados. 96 km nearly 41 hours in the water. Astounding. He never let up. Total focus all the way. Swimming for a purpose: The Ubunye Challenge.”

At the 27-hour mark, she reported, “Cam is still giving thumbs ups and has maintained an average stroke rate of about 55 per minute for the entire swim! has just reached the north of island. They say, ‘It takes a village to raise a child,’ well it takes many Barbadians and much planning to get Cam around the island. Six boats, over 30 key volunteers, medics and others have been involved! Detailed feeding plan to be followed, observers carefully maintaining logs, kayakers, boat pilots and a lot of zinc oxide to protect against the warm sunshine.”

To vote for the World Open Water Swimming Man of the Year and the WOWSA Awards, visit here.

Bellamy also provided a short 8-minute speech via YouTube that was shown at the Open Water Summit at the Olympic Club in San Francisco, California this past weekend: