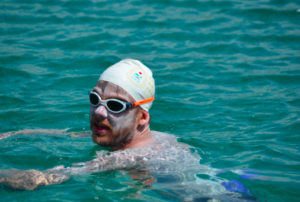 Cameron Bellamy has completed the Oceans Seven swims, rowed across the Indian Ocean and swam around Barbados.

Disappointed at being thwarted in his attempt to swim from Cuba to Florida, South African Bellamy shifted gears and shifted aims to swim a similar distance and an equally epic ocean swim, a 150 km swim across from Barbados to St. Lucia.

Kristina Evelyn reported, “His initial plan for 2019 was to attempt a 103-mile swim from Havana, Cuba to Key West, Florida. Cameron put in the rigorous training, spent considerable time researching the past attempts, secured a support boat and assembled a global support crew to join him on the swim. However, in late August, the permission required for the support boat to enter Cuban waters was denied by the United States Government, based on the more stringent regulations enacted in June 2019.

Despite this extremely disappointing setback, Cameron, who has not yet given up on his Cuba swim dream, continued his swim schedule including two recent 24-hour training swims and devised an alternate plan. Plan B: pioneering a new swim route between Barbados and St. Lucia.“

Bellamy explained the difference between the comparable distances, “Barbados – St. Lucia is trickier than the Florida Straits in myriad ways.”

He is ready. In November 2018, Bellamy completed a circumnavigation swim around the island of Barbados, swimming a gruelling 96 km around the jagged coastline in 40 hours 43 minutes.

Evelyn described the Swim Around Barbados as “the fourth longest non-stop, unassisted sea swim ever was completed under imperfect conditions including 14+ hours of adverse currents, detours due to large swells, a powerful squall, and frequent backwash from cliffs. But Bellamy drew on his steely resolve, maintained an uncanny focus and similar stroke rate throughout and with his sheer determination defeated the unforgiving seas after almost two days of swimming. This outstanding success announced the arrival of a serious contender for conquering the world’s longest and most difficult open water swims.

The start of the Barbados to St Lucia swim is tentatively scheduled for September 15the and is dependent on a suitable weather window, a period of at least three days when favourable conditions are predicted. The swim could take between 50 – 60 hours to complete and real time tracking will be available online.“

Ubunye Challenge was founded in 2011. The charity focuses primarily on the provision of early childhood education in poor and isolated areas in South Africa and Zimbabwe. Bellamy grew up in a privileged suburb in Cape Town and often saw children his own age not attending school. This had a profound effect on him and led to the birth of the Ubunye Challenge years later.

Over the past eight years, the Ubunye Challenge, together with partners Ubunye Foundation and Vimba, has assisted in creating 16 new early childhood development sites in the rural Eastern Cape of South Africa. These sites now teach 350 children on a daily basis. Ubunye is currently fundraising to supply these 16 sites with access to the internet to assist with technology and computerized learning.

In Zimbabwe, the Ubunye Challenge has constructed classroom blocks at Mapere Primary School, a severely overpopulated school in the disadvantaged area of Concession and is currently funding a very ambitious project to build the first A-level school, Mwenje Secondary School, in the same area. This year Mwenje enrolled 100 students in forms 1 and 2. Ubunye has recently fundraised the amount needed for the construction of the 3rd and 4th Form classroom blocks which will enrol students in early 2020.

The Ubunye Challenge additionally assists local Caribbean educational causes. Bellamy has spent considerable time in the Caribbean while swim training and competing. He feels very close to the region and passionate about assisting in the education of its youth.