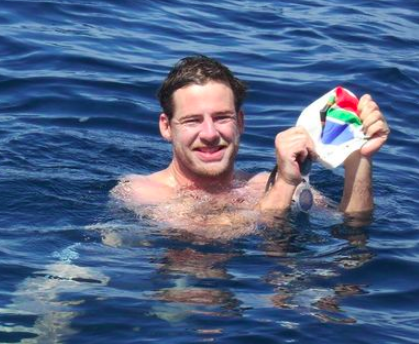 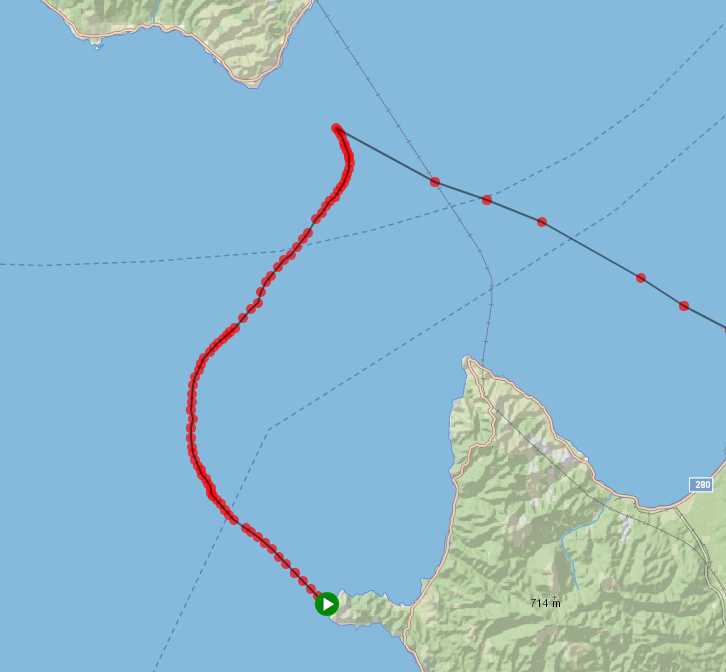 Cameron Bellamy from Cape Town, South Africa attempted the latest crossing on record of the Tsugaru Channel in late October. He has been successful in his other channel swims and rowing, cycling and triathlon endurance events over the course of his athletic career, but his sixth Oceans Seven attempt in Japan – only temporarily – got the better of him [see Track.RS GPS on left].

However, by working with American Steve Walker at Cobaltix and working out in Aquatic Park in San Francisco, the personable South African is still on track to realize his channel swimming goals.

Daily News of Open Water Swimming: What endurance events have you attempted or completed?

Daily News of Open Water Swimming: Why did you get into endurance sports?

Cameron Bellamy: From the age of 13, I started rowing and continued through high school and university. I rowed at a high level and represented South Africa at the 2003 U23 World Rowing Championships and the 2004 World University Championships. After I finished my post-graduate studies in Australia, I moved to Beijing, China for work and decided to stop rowing.

I lived in China for three years. In my final year there, I decided to quit my job, buy a bicycle and cycle out of China in a westerly direction. Four months later, I ended up in Kanyakamari, India, after cycling for 5,000 miles in four months.

The reason for finishing the cycle was that I had run out of financial resources. My previous company managed to fit me into a job in London, and that’s where I went next.

After completing that cycling trip, I decided to get into endurance sports. My initial aims were to cycle the United Kingdom from south to north in seven days, swim the English Channel, and then row across an ocean. I’ve completed those events, and more, under the banner of a charity I created called the Ubunye Challenge.

The Ubunye Challenge is an initiative to raise funds for sustainable development in the poorest areas of Africa through sports challenges [see here].

Daily News of Open Water Swimming: When did you start marathon swimming?

Cameron Bellamy: I swam the English Channel in June 2012. Training for that swim started in November 2011. I previously had no swimming training or experience, barring a couple of triathlons, here and there.

Daily News of Open Water Swimming: Was the transition to marathon swimming difficult?

Cameron Bellamy: I had never really swum before, so yes it was. As I was new to swimming, I needed a lot of technical work. I found a great coach in Ray Gibbs of Swim Canary Wharf in London. He helped me swim with a very modern long distance freestyle technique. In terms of endurance, it wasn’t too difficult to transition from rowing and cycling to swimming.

Daily News of Open Water Swimming: Can you describe what led to the DNF in the Tsugaru Channel this fall?

Cameron Bellamy: Considering the 2 typhoons our window was sandwiched between, the weather on our swim day wasn’t too bad. I was with Steve Walker, swimming in tandem. We set out at a good pace. However, on reaching the middle of the channel, we realized we were in for a long day of swimming. The currents were moving extremely fast and our speed dropped from 2.2 mph to about 0.5 mph for a large portion of the swim.

As we neared the northern part of the channel and temperature of the water dropped dramatically, from 62 to 57 degrees in the space of a mile. The ambient temperature also dropped to below 50 degrees as the sun went down.

The combination of fatigue after trying to break through the middle of the channel and the sudden temperature drop, after 13 hours of swimming, and an estimated four hours left, we decided to end of attempt. It was a difficult decision, but personally I’m looking forward to going back to Japan to try again. This time earlier in year when the water temperature will be warmer.

Daily News of Open Water Swimming: You are a South African living in San Francisco. How did you find your way to Silicon Valley?

Cameron Bellamy: I have had the privilege of living and working in South Africa, Australia, China, the UK and now the USA. The latest change came about in 2015 when I decided to attempt the Strait of Gibraltar. I met Steve Walker in Tarifa, Spain and we ended up doing the swim together. We chatted a bit about work during the swim and on Skype numerous times over the following few months. Eventually we decided that I would come to San Francisco to help Steve set up a cyber security consulting company.

In addition to working together, Steve and I train together a great deal. We plan numerous swims together while in the office, and my relationship with Steve has immeasurably helped my swimming career.