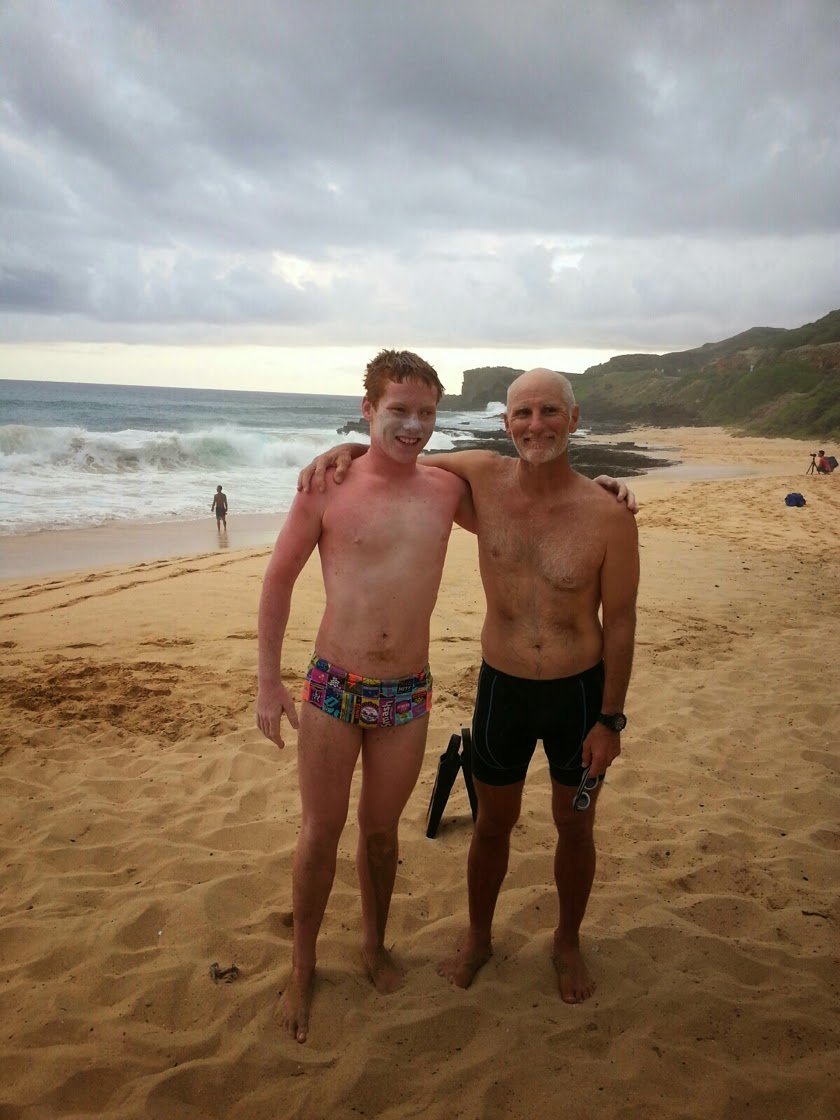 The Moloka’i Channel, also known as the Ka’iwi Channel, is 26 miles (42 km) of currents, winds and waves. Cameron Keith from Cairns, Australia took on that challenge starting at 3 am on September 30th.

After swimming 13 hours 55 minutes, Keith became the youngest person to cross the channel at only 15 years old. The Ka’iwi Channel attracts long distance ocean swimmers from near and far who wish to get a taste of what it’s like to swim a rough water marathon. Whether it’s for record breaking, or for those who just simply enjoy long, treacherous swims, the Moloka’i Channel is such a challenge – with unmatched marine beauty – to offer.

Mackenzie Miller, who was a 19-year-old teenager herself in 2009 when she crossed the channel in 14 hours 45 minutes, interviewed Keith on his feat.

Daily News of Open Water Swimming: So, how does it feel to be a world record holder for the youngest swimmer to complete the 26 miles of the Ka’iwi Channel?

Cameron Keith: The Ka’iwi Channel was the most physically and mentally challenging thing I have ever done and to sit here and say I have done it feels amazing. In being the youngest, I hope to give inspiration to other people to accomplish their dreams at whatever age they want.

Daily News of Open Water Swimming: How are you keeping up with school while crushing a swimming record in another country?

Cameron Keith: I am in grade 11 currently so I have about a year and a bit to go until I hopefully go to University. My school back in Cairns, St Andrew’s Catholic College has been very supportive with my swimming. It is sometimes hard to keep the balance between sport and school, but it occasionally takes a few late nights to keep up.

Cameron Keith: I have been swimming from when I was a young boy at 4, I just loved the water. I started in the pool at the local carnivals just for fun and then I discovered that there are some crazy people that swim insane distances in open water. My first open water swim was just 1 km and I loved it. It all just progressed from there to where I am now.

Daily News of Open Water Swimming: Did you get to do any training swims in Hawaii before your attempt? If so, where did you swim?

Cameron Keith: Along with the long training sessions, I did a local swim from Green Island back to Cairns [see here]. The swim was 29 km so it was a nice warm up for Molokai. It took me 7 hours on the dot so I had a few more hours to go.

Daily News of Open Water Swimming: Who is in Hawaii with you? Who accompanied you on your crossing?

Cameron Keith: My family all came over to Hawaii to double the swim up with a holiday. My mum Helen and sister Cara stayed on Oahu while my dad Alan, coach Ben Eales, and Jeff Kozlovich [shown above with Keith] went over to Molokai. Jeff paddled most of the way back and my dad and coach encouraged and helped prepare the feed bottles on the boat.

Daily News of Open Water Swimming: I heard about your delay in starting due to boat trouble! How did the whole ordeal make you feel about your crossing attempt?

Cameron Keith: Yes we were held back a day due to a fault in the escort boats water pump. This was very frustrating as we were over at Molokai stranded for another day. It was just the waiting that frustrated me the most, not knowing when or even if we are going.

Daily News of Open Water Swimming: How relieved were you when you found out a second boat was coming to the rescue so you could do your swim?

Cameron Keith: This was the best news of the whole trip. To finally get conformation that we are going was fantastic. I had waited for that day for about a year so it was great that I could finally get a shot at it.

Daily News of Open Water Swimming: How was the swim overall? Weather, wind, currents? How was swimming at night, scary at all?

Cameron Keith: When I got up to start I could only see the lights of the boat about 200 metres off-shore it was so dark. It was a bit freaky at first to swim at night, not knowing what’s around you. But I had the confidence that the crew and paddler would keep me safe. The weather that day was fantastic. Jeff said it was the best day he has seen in the channel. The winds were light; however, the currents at Sandy Beach were hard to swim through.

Daily News of Open Water Swimming: I heard you had a few unwanted jellyfish friends. Did the stings hurt too bad?

Cameron Keith: I got stung all over my body, but they weren’t as bad as a thought they would be. I could see some below me when I was swimming – they were more amazing to look at than anything. The stings hurt for about 15 minutes and then they would fade away.

Daily News of Open Water Swimming: What was your food and beverage of choice during the crossing?

Cameron Keith: I had a selection of Power Bars, chocolate and some fruit to eat and mainly had a mix of carbohydrate and electrolyte water to drink.

Daily News of Open Water Swimming: You were drinking a Coke immediately after finishing the swim. Is this what you craved the most during your crossing?

Cameron Keith: It was good to get some instant energy and the sugar taste back after the salt water had dried my mouth out.

Daily News of Open Water Swimming: What has been your favorite food while in Hawaii? Any preferred plate lunches for carb-loading?

Cameron Keith: My favourite food in Hawaii would have to be the Hula Pie at Dukes. It was a great big chocolate mud pie which I enjoyed. I mainly carb loaded on lots of pasta before the swim.

Daily News of Open Water Swimming: What else do you have planned for the duration of your stay in Hawaii?

Cameron Keith: Before I swam, we had some days at the beaches up the east coast of Oahu which were very nice for some bodysurfing. We visited Diamond Head Crater which had a great view from the top and we also went to Honolulu Zoo which was also very interesting and fun.