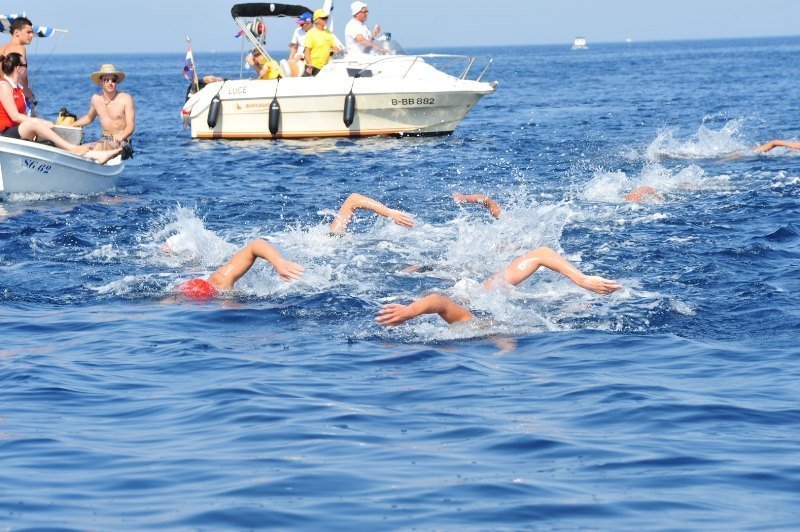 The story how marathon swimming began in Croatia started a long time ago under unusual circumstances. It all began when the actors of the Zagreb theatre troupe Histrioni performed Domagojada, a play dedicated to the sea.

Back on that warm summer day in July 1974 in the Škor square in Stari Grad, their performance inspired a young man, Vicko Šoljan, who went onto organize the first swimming marathon in Croatia in the Bay of Stari Grad.

During that play, Šoljan, who already had achieved notable success with the Swimming and Water Polo Club Faros, decided that a swimming marathon should be organized in Stari Grad because of its ideal shape of the bay. The event would stimulate the younger generations over the decades while entertaining visiting tourists.

In the last decade, Croatian open water swimming society has significantly grown. The Croatian Long Distance Swimming Federation organizes the Croatian Cup (CRO-Cup), a national marathon swimming competition that is growing annually. Many years have passed, but hard work and passion has been the basis for the event that did not even stop during the war in Croatia.

The next stage of development in Croatia will soon begin. Croatia’s first open water swim camp will be held this summer.

As a tribute to its induction in the International Marathon Swimming Hall of Fame, Dr. Josip Aralica, the CEO of Altiora, who has been a long-time member of the long distance swimming society, will organize an open water swimming camp. His aim is to attract enthusiasts who enjoy the freedom of outdoor swimming, who want to meet other swimmers, and swim at some of the most beautiful beaches in the world, while learning from the best Croatian open water swimming coaches.

Aralica is passionate masters swimmer who will share his passion in a one-week period covering technique, tactics and training. “We want you to enjoy your time spent with us, to work on what you learn throughout the entire year, and to come back to the camp the next year. We are at your disposal. If you have questions about our program, please write to info@altiora-cro.net. There will also be a 10 km race called the Split Open on August 18th.”​