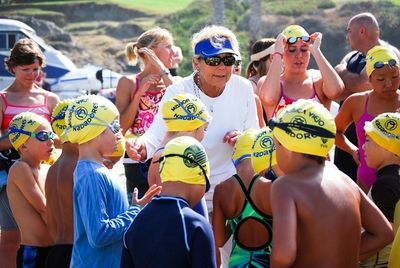 In the latest issue of H2Open Magazine, publisher and passionate swimmer Simon Griffiths describes and offers different models for teaching school children in Great Britain (and elsewhere) how to swim so they are water-safe [read here].

Over the years, Griffiths has provided myriad background information and commentary on this issue.

He notes the failure of many schools to reach the national curriculum standard of every child being able to swim 25 meters by the time they leave primary school.

Across the pond in the United States with similar goals, the USA Swimming Foundation runs a Make a Splash program that is a nationwide child-focused water safety campaign. With a number of personable Olympians, Make a Splash aims to provide the opportunity for every child in America to learn to swim.

Another well-established swimming nation – Japan – may provide one model on what is necessary to each and every child to swim. It is not easy and it requires significant resources.

Swimming has long been performed in the island nation of Japan by the samurai warriors, but it took a tragic sinking of a passenger boat in 1955 where 168 people drowned that spurred a nationwide building of swimming pools at schools in 1961. The Ministry of Education defined and encouraged the teaching of freestyle and breaststroke as a result.

The construction program was largely successful with 86.7% of all elementary schools, 73% of all junior high schools, and 64.5% of all high schools in Japan with their own pools and swimming as a compulsory subject in public education.

While children and teenagers throughout Japan learn how to swim in school, swimming was a matter of military necessity in previous centuries. Between the 15th and 17th century, warriors occasionally swam with their armor and helmet. Between the 17th and 19th centuries, swimming was passed along by military personnel who had to navigate through the rivers, seas, and lakes of Japan. Those traditions are kept alive by the Japanese Swimming Federation that authorizes 28 traditional styles of swimming as “Nihon-eiho” (Japanese style of swimming).

Professor Atsunori Matsui explains that in the Japanese swimming textbooks of earlier times, the Japanese taught simple things (e.g., how to put swimsuit on), technical strokes (e.g., sidestroke, freestyle with scissors kick), survival skills (e.g., how to stay afloat, how to dive, how to recover from cramping), and open water navigational issues (e.g., how to go through waves and how to swim out of currents and eddies). 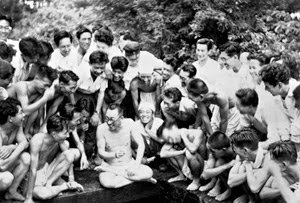 In 1968, swimming was recognized as an important physical exercise in school due to the revision of curriculum guidelines by the Ministry of Education. It is required in elementary school and by the time they are in junior high school and senior high school, they are also taught backstroke, butterfly, and the individual medley.

Photo on left shows Jigoro Kano (1860-1938), the founder of Judo and first Asian member of the International Olympic Committee.

Kano also served as director of primary education for the Japanese Ministry of Education who insisted on the importance of the swimming education and made it with a compulsory subject in a teacher-training curriculum.