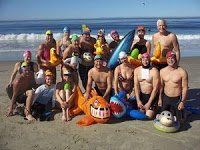 Hackett’s workouts paid off as he swam to a silver medal in a 15:03 in the 1500m at the 1976 Montreal Olympic Games (explained below with friend and rival Brian Goodell).

That tradition carries on around pools and pods.

While masters swimmers, marathon swimmers and age-group swimmers may not go as fast as Hackett did back in the 1970s, some of them still like challenging themselves to a 10,000 yards or meters set. In particular, during the winter months or during the holiday season, thousands of masters swimmers and competitive swimmers test themselves to the annual 100 x 100 rites of passage in the pool.


But in the same holiday season where hundreds of pods of swimmers are doing their annual 100 x 100s in pools across the world, the Oak Streeters (shown above), a pod of open water swimmers in Laguna Beach, California, set out to do their 100 x 100s open water style in 2012.

Instead of doing one hundred one hundreds in a flat-water, warm-water, chlorinated setting while swimming circle pattern, the pod of open water swimmers challenged themselves to a century swim course in the dynamic environment of the Pacific Ocean at Laguna Beach.

“We started in chest-deep water right by the lifeguard tower on Main Beach and head straight out to the outside buoy. This is 100 yards to the buoy, 200 yards round-trip. We tried to swim back and forth 50 times to get in our 10,000 or 100 x 100’s,” explained team motivator Scott Zornig.