Canada On The Rise With Weinberger And Carr 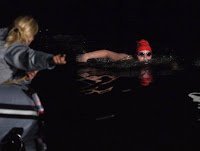 This August, two young Canadians did their best to revive the proud history of marathon swimming: Richard Weinberger and Annaleise Carr.

Both generated a lot of media attention…and deservedly so.

22-year-old Weinberger swam to a bronze medal in the Olympic marathon swim in the Serpentine at the Olympic Games in the toughest, deepest field in the sport, positioning him as a force to be reckoned with over the next Olympic quadrennial.

Not only did she bring attention to the sport, but she also raised over C$135,000 for Camp Trillium. Her passion and personality were just the right boost to keep open water swimming in the news in Canada.

Photo of Annaleise Carr by The Canadian Press.