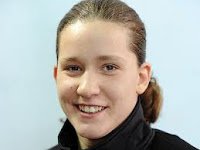 One of the swimmers who is competing in this week’s Queen of the Sea (Desafio Rei e Rainha do Mar) competition on the 2016 Rio Olympics marathon swim course is Zsofia Balazs.

The 22-year-old Olympian from Toronto, Canada has a non-linear trajectory up the elite ranks of professional marathon swimmers.

Currently a student majoring in Police Foundations at Hambert College with dreams of entering the law enforcement field, she was born and raised in Hungary.

“In 2004, our family moved from Hungary to Toronto when I was 13. I was scared because I didn’t speak English. But I figured my parents knew what they were doing.”

Raised as a competitive age-group swimmer, she concentrated on backstroke until she discovered open water swimming. “I qualified to represent Canada for the 2006 Pan Pacific Swimming Championships, but I was not allowed to go because I had not yet received my [Canadian] citizenship yet.” But she kept on competing in the pool and open water and soon started to represent Canada on the international level.

“It was good to start swimming again when we moved to Toronto. I just jumped in with the swim team and had to learn English right away. But the swimming was a bit different in Canada versus Hungary. You cannot be late to practice in Hungary. They are very strict. In Canada, it was a little less strict. On the other hand, nutrition was more important in Canada. In Hungary, I remember that no one really cared about nutrition. I used to go to swim meets eating candy, she recalls with a smile.

“I also remember competing against [Olympic 10K Marathon Swim champion] Eva Risztov in an 800m freestyle back in Hungary when I was younger. She lapped me, but I ended up asking for her autograph.” Little did she know, she would end up lining up next to Risztov in Hyde Park at the 2012 London Olympics where Risztov took the gold and Balazs finished 18th.

“I was able to visit my grandparents in Hungary after the 2012 London Olympics. It was great, but also a bit sad because I never quite know when I will be able to see them again.”

The future police officer is forging a new life in Canada where she will continue to swim internationally and will certainly have opportunities to fulfill her dreams as she travels around the world.

For more information on the King and Queen of the Sea (Desafio Rei e Rainha do Mar), visit here.

Tags: King and Queen of the Sea, Zsofia Balazs