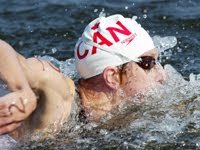 Roberval has rolled out the red carpet for hundreds of elite open water swimmers and delegations from over 30 countries to the 2010 World Open Water Swimming Championships in Roberval, Canada.

Dr. Julio Maglione, the FINA President, opened the festivities with a bilingual address to the gathered media at today’s press conference.

“I want to express my sincere gratitude to Swimming Canada, the city of Roberval and the local organizing committee.”

Pierre was referring to the notoriously cold water of lac St-Jean has increased in temperature to an unseasonably and unprecedented 24°C (75°C) that have greeted the swimmers at the 2010 World Open Water Swimming Championships. Most of the swimmers were quite happy and surprised to learn of the warm-water conditions.

“Swimming Canada is excited to host the world championships and we are thankful to Dr. Maglione for having confidence in us. Sport is a place where people can dream. That is the power of sport.”

Canadian National Team coach Ron Jacks repeated the excitement of Dr. Maglione and Pierre. “The 7-member Canadian team is in good spirits after a 5-day training camp in Montreal. The swimmers have had a great week of preparation in Montreal. The 10K will be our great event. With the event now being in the Olympics, we are seeing a surge of swimmers trying to grain that experience for the 2012 Olympic Games qualifier next year in Shanghai.”

“The Canadian team is comprised with some solid veterans such as Simon Tobin of Quebec, Zsofie Balaz of Toronto and Nadine Williams of Sherwood Park who all competed at the 2009 World Swimming Championships. I’m optimistic that we will get a few surprise performances from our veterans and rookies.”