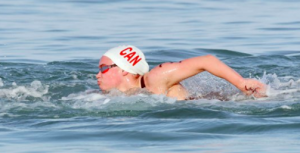 Courtesy of WOWSA, Colonia Sant Jordi, Mallorca, Spain. Canadian swimmers Chantel Jeffrey and Alexander Axon each won races at the Best Fest open water festival in Colonia Sant Jordi on the Spanish Mediterranean island of Mallorca. Jeffrey who swims for the Island Swimming Club in Victoria, British Columbia won the senior women’s 5 km race on Sunday and also captured the 1.5 km race on Tuesday.  Jeffrey, who will compete in July’s FINA World Championships in Gwangju, Korea, said, “I learned about my own abilities and what kind of things I have to work on.  I’m excited for what’s coming up in the near future.” Axon who swims for Markham Aquatic Club in Markham, Ontario also won those same titles in the junior men’s division. Swimming Canada Open Water/Distance Coach Mark Perry took his fast pool swimmers to Mallorca on a national team training camp with the purpose to learn and gain valuable experience for future competitions.  “It was the first open water experience for many of them.  We used a drone to film the swimmers in order to enhance post-race analyses. The athletes’ glucose levels were tested to show when is the best time to do a pre-race activation as part of the preparation for upcoming events, including the world championships.” Kenna Smallegange of Burlington Aquatic Devilrays in Burlington, Ontario was victorious in the junior women’s 5 km division while Madison Archer of Nepean Kanata Barracudas in Ottawa, Ontario finished second.  “I thought it was a real good race for me, from point to point,” Archer said. “I just focused on my own race and didn’t really care what other people were doing.” Smallegange followed up her victory on Sunday with a bronze in Tuesday’s 1.5 km race.  She said afterwards, “The  5 km  was a very good race and it was a good opportunity to show what we had been practicing and learning in the pool and the classroom.  The 1.5 km was a little rough, but it was still a good opportunity to practise racing close to a lot of other people.” Copyright © 2008-2019 by World Open Water Swimming Association