Canaries In A Coal Mine 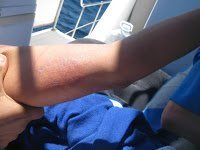 Open water swimmers are the modern-day, human version of canaries in the coal mine.

Jellyfish have never been a bigger threat to open water swimmers with overfishing and other factors leading to a global jellyfish population explosion.

And open water swimmers all over the world – even more so than surfers, wind surfers, boaters, fishermen, naval personnel and divers – are becoming increasingly aware of this growing phenomena.

When open water swimmers venture further from shore – without wetsuits – than anyone else in the sporting world, they come across these unseen, silent, stinging creatures in places that even the scientists are not fully aware of.

If anyone has photos or stories about where and when they have come across stinging creatures of the deep, please share your experiences with the Daily News of Open Water Swimming so we can help share it with the rest of the global open water swimming community.