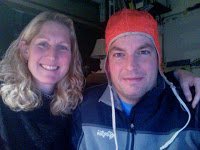 Bruckner Chase and his wife Michelle, daughter of the great Lt. Colonel Stewart Evans, are shown on left with Stewart’s original non-neoprene swim cap that he wore on the first Farallones Islands to California coastline swim in history.

The story behind Stewart’s swim and career is forgotten in the annals of marathon swimming history.

Not only did he do a Catalina Channel crossing, but he also helped Ted Erikson on his own Farallones Island swim and was a stalwart member of the Dolphin Club in San Francisco. While Ted is best known for his direct route from the Farallones where he ended up by the Golden Gate Bridge, the currents and tides took Stewart on a more northerly route where hit the California shoreline north of the Golden Gate Bridge.

While both men faced sharks, cold water and strong tides, Stewart walked up shore and remains one of the only two individuals in history to swim from the Farallones Islands to the California mainland.

Once described as the most desolate place on earth, the Farallones will see several (at least six) swimmers and at least one relay make attempts in 2011.

What Stewart and Ted did back in 1967 may soon be replicated by many more.