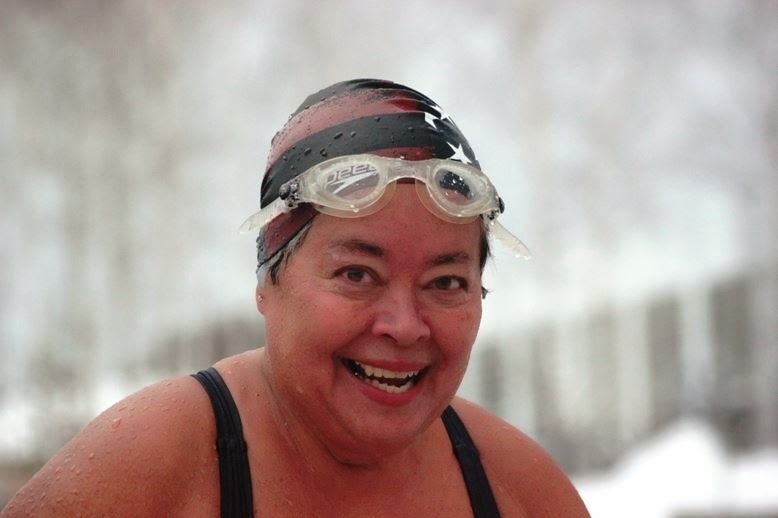 “I tell people to follow your heart, follow your passion – and you will find that life’s journey will show you amazing people, places, and adventures,” so advises winter swimmer Capri Djatiasmoro.

The 60-something New Yorker says of her own journey that began with the Coney Island Polar Bears on New Year’s Day 2000, “I never stop swimming. I swim year round. I train through the winter months – Saturdays at Brighton Beach in Brooklyn, New York with Cristian Vergara and several other cold water swimmers, and members of CIBBOWS. On Sundays, I swim with the Coney Island Polar Bears. Although the majority of Bears only dip, there are a few Bears who swim back and forth between the jetties.”

Her passion continues and is acknowledged by the ice swimming community.

She was invited to the Tyumen Open Cup 2014 by Dmitriy Dragozhilov, Director of the Tyumen Winter Swimming Association after a year of accomplishments.

But her journey was sandwiched between her high-pressure job in the New York advertising world. “I arrived in Tyumen [Russia] the night before [from New York] due to work constraints. We are very busy; they did not want to let me go.”

But she did. Not only did she travel halfway across the globe, but she was also concerned that she had never done competitive ice swimming before. It turned out to be an unnecessary concern as she was prepared.

“I train with Cristian Vergara all winter at Brighton Beach. The coldest water I had been in was 29ºF (-1.6ºC) at Orchard Beach in the Bronx with the Coney Island Polar Bears. There were little icebergs floating by us in the water.”

After her year-round training, she participated in the International Winter Swimming Festival in Argentina by Matías Ola. She did three ice swims in Puerto Madero in Buenos Aires, Lago Potrerillos in Mendoza, and amid glaciers in El Calafate in Santa Cruz. In Argentina, she met Dragozhilov and the seeds to head to a weekend in Siberia’s Tyumen Open Cup were sowed.

Djatiasmoro was joined in Tyumen by 292 athletes from 60 clubs in 34 regions of Russia and 18 other countries including Argentina, Belgium, Brazil, UK, Denmark, Italy, Ireland, Israel, Kazakhstan, Latvia, Netherlands, USA, Finland, France, Czech Republic, Chile, South Africa and Russia. The ages ranged from 12 to 78 years in the annual event held in a relative Siberian heat wave. “The air temperature was -15ºC; the water temperature was 0.5ºC. While we were there, they had a heat wave; normally it is -30ºC.” 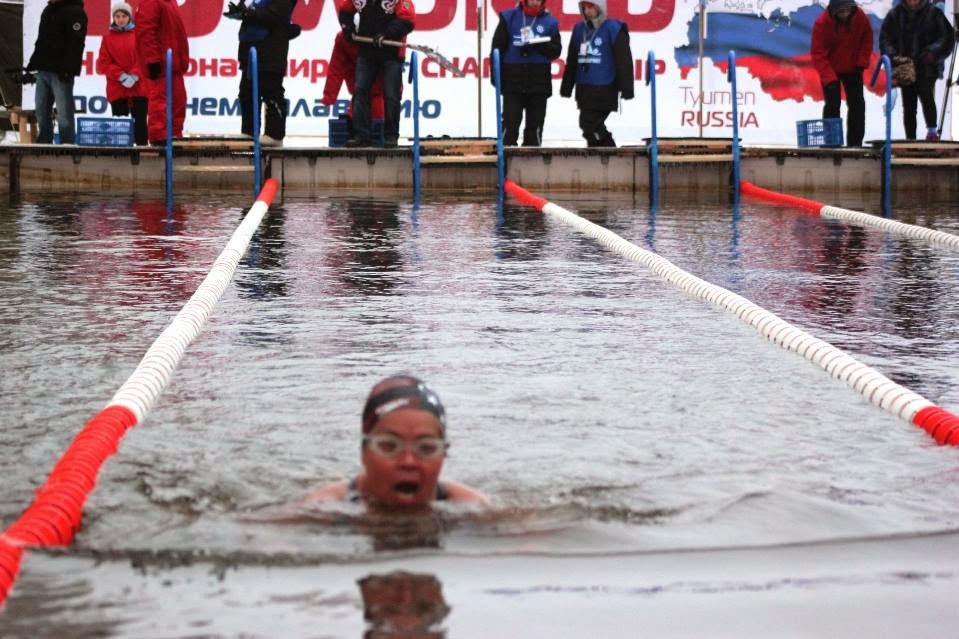 Hours after traveling around the world, she swam her first event, the 25m breaststroke. “When I got out of the water, my fingers felt like someone was hitting them with a hammer. Later I found out this is caused by the capillaries opening up too fast with the blood rushing through – so, the warming process needs to be controlled and very gradual.”

As she dealt with the after drop in the warming tents and recovering in the saunas, Djatiasmoro readied for her second event, the 25m freestyle. “After that, I was ok without hammer fingers. So I continued to swim the 50m breaststroke and then the 50m freestyle. During the lunch break, I started to crash from the adrenalin rush and exhaustion from the jet lag was settling in.”

Despite the exhaustion and jet leg, Djatiasmoro dug deep and got through the 200m freestyle. At the awards ceremony that evening, she was pleasantly surprised as she reached the podium four times with 2 silver medals and 2 bronze medals.

And back to New York City for work on Monday where she will start training for the 450m next year: