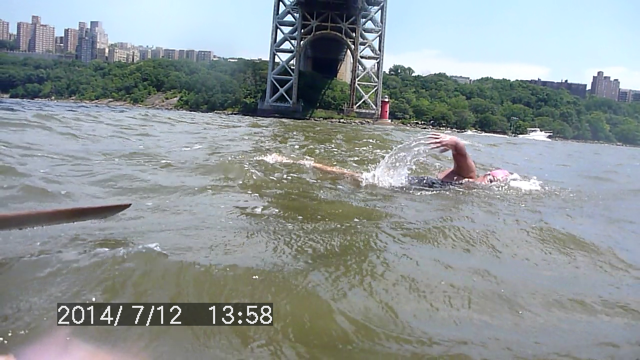 Capri Djatiasmoro, a 63-year-old dynamo and volunteer extraordinaire with NYC Swim, decided to give herself a nice present for her 63rd birthday.

The Project Manager from M&J Edelman & Associates decided to go long and go hard, swimming all the way around Manhattan Island. On July 12th, she attempted and completed the 28.5-mile Manhattan Island Marathon Swim.

She started at 6:06 am and finished at 5:06 pm, a long birthday swim of nearly 11 hours. Her race timeline was as follows:

Djatiasmoro explains, “The race start was flat – I got to the bottom of Battery Park and made the turn up into the East River which was running flat and very fast. I was passing joggers all the way up to Gracie Mansion and Hell’s Gate where the current came to a dead stop.

Rather, I was swimming against a 1 knot current, barely making any progress. Terry my paddler put me very close to the seawall where there was a path of least resistance, but I was still struggling. Little by little, I was getting closer to the 103 Footbridge. Terry and Morty [Berger, the race organizer] were yelling at me to “SWIM!”. Terry said, “Swim or get pulled” – then I recalled other swimmers giving me pre-race advice, “Capri, you must make it to the 103 Footbridge”. With the threat of getting pulled, I was having a breakdown. My stroke fell apart, but then I got mad and determined and made it past the Footbridge.

But I was still not in the clear. The current had not switched yet. I was barely making any progress, struggling to swim. I heard the words of swim coach Igor Shoukhardin in my head, “Capri, you only think you are tired, but you are not tired.” I kept hearing those words in my head all through my swim. That is what got me through the entire swim, because I have never swum myself to exhaustion.

Further up into the Harlem River, the current was just starting to switch. Terry kept encouraging me to swim harder. If I didn’t make it to the Willis Avenue Bridge in 30 minutes, I would get pulled … again?!? The threat of getting pulled again? Damn it!

I started swimming mad and was determined to get into the Hudson River. That is what I did; the cut-off at the Hudson was 6:15. I got to the Hudson in just over 7 hours. I knew the current would be flying downstream and I knew I would have wind, waves, and chop with the wind coming up the Hudson there were white caps breaking, but I just kept swimming, remembering advice from swimmers who like to swim in chop: go long, almost swim catch-up, try to get the rhythm of the waves and breathe on top of the wave. I kept my head down breathing every 4, 6 or 8 or 5 and 7.

One month earlier, I had swum Stage 6 of the 8 Bridges Hudson River Swim (from Tappan Zee Bridge to the George Washington Bridge) that had worse conditions: 3 to 6 foot white capped waves. I had used that very tough swim as a training session for the Manhattan Island Marathon Swim. So when I got into the Hudson [River] with the chop, I thought, “OK, I got this!” Post-race, my crew on the boat including Alan and Arlene told me my stroke rate had dropped to 44 [spm], but then I settled down and it came back up to 57-60. They told me I was swimming well in the chop – it felt good.

We kept going down the Hudson. I knew all the landmarks. The 3 pm cruise ship was pulling out. We got to Christopher Street Pier and Terry was blowing his whistle hard and yelling at me to swim out into the river. I was on a direct collision course with the pier. My support boat was at the end of the pier. I thought, “How nice, they are blocking the pier so I don’t hit it.” Post-race, I found out that they had engine issues and were pinned to the pier and had to be rescued.

Terry and I continued to the end without the boat and my crew. Then, as planned, Terry turned in at the North Cove. There was another boat that stayed with me. I was close to the seawall heading to the South Cove making progress, but I could feel the push of the current was slowing down. I passed the South Cove and continued following the seawall. I thought I saw the end of the seawall where I had to make a hard left turn into the finish cove, but NO…the wall curved in and continued to the left…oh my God. I could feel the undercurrents beneath me.

When currents switch, they do not stop and switch on a dime, there is a period of flux and turmoil. So even though I still had a little push, I could feel the cold rolling currents below me. The switch was starting. I thought oh my God! NO – all this way and you’re not to make it to the finish? Are you kidding me? Hell no! I kept swimming hard … looking for the end of the wall.

Where is that last left turn into the cove? I heard the roar of the crowd above me. People yelling and screaming, cheering for me. That pulled me in. Then, finally I saw the end of the wall and made the last left turn and there was that beautiful orange buoy … touch that baby! Oh my God! I can’t believe I did it. I did it! Oh my God!

How did she do it?

Besides the mental toughness of a mature woman committed to a specific goal, Djatiasmoro does 90-minute masters swimming workouts 3 three times a week on Wednesday, Friday and Sunday nights as well as ocean swimming at Brighton Beach on the weekends with CIBBOWS on Saturdays and Sundays under all conditions. She also does a boot camp working on her core and upper and lower body twice a week as well as a MELT class on hard foam rollers once a week. She also does Tai Chi Chen Style – Qigong – and swords – and went to TNYA swim camp in Fort Lauderdale, Florida. “CIBBOWS, the Coney Island Brighton Beach open water swimmers, is the absolute best swim training resource in the New York area. The shared knowledge and easy flowing camaraderie is priceless.”

She was also greatly appreciative of the efforts of Terry O’Malley, her paddler, Morty Berger, her coaches and her mother. “Terry’s dedication is unsurpassed. We had discussions on the water, but in the end, I listened to and followed his instructions, because there is no doubt in my mind he knew what was best for me as a swimmer. Morty suggested that I attempt MIMS. Never in my life would I ever consider a 28.5-mile swim race around Manhattan, but Morty knows me very well as a swimmer and said I could do it … and I did. And thanks to my swim coaches: Jorge Cardoso, Jonathan Dickson, Oscar Pineda, Igor Shoukhardin, and Amir Arslanoff Sibgatullin, and to my mother, an adventurous spirit, who, when she wasn’t roller skating, used to swim in the harbor in Baltimore.”

Photo by Terry O’Malley when Djatiasmoro was swimming underneath the George Washington Bridge heading downstream to the finish.