Carina Bruwer Is A Little Fighter 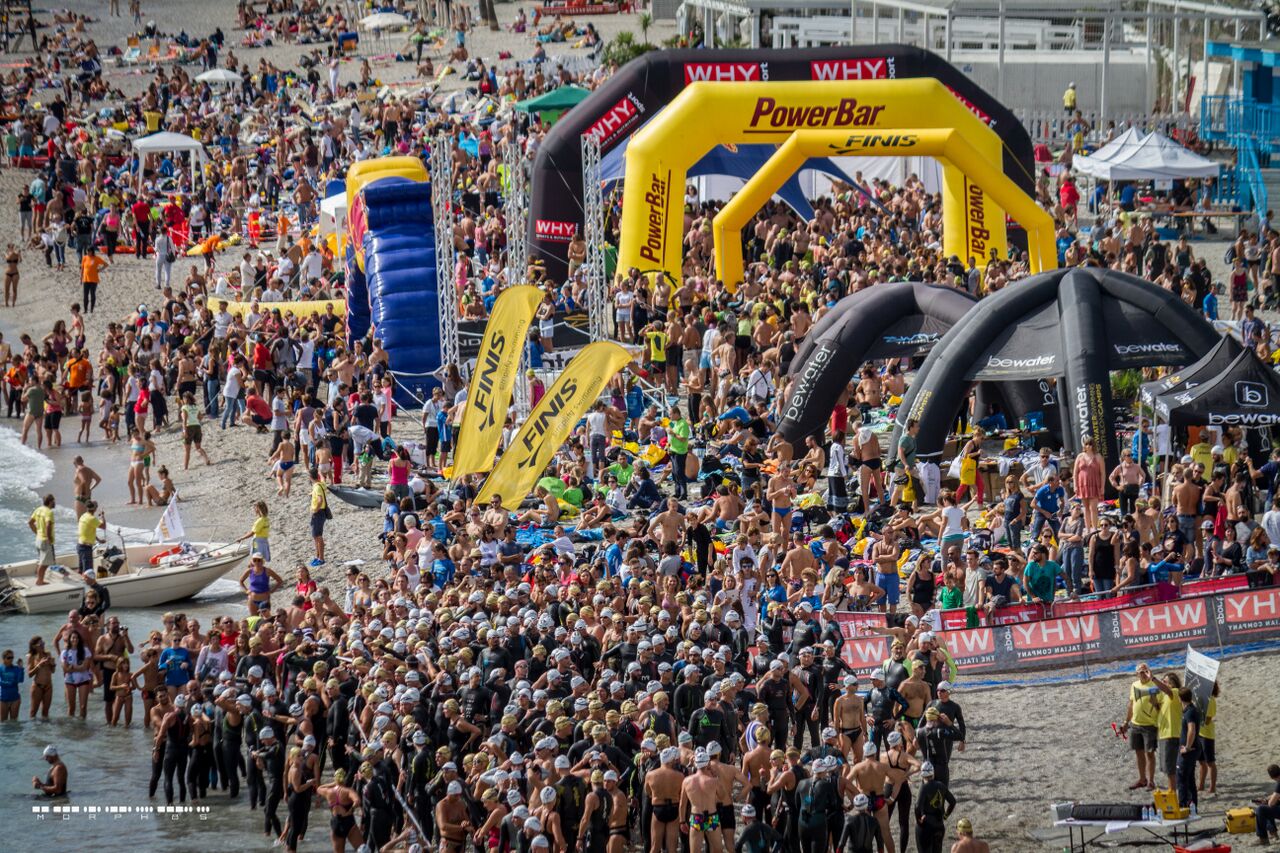 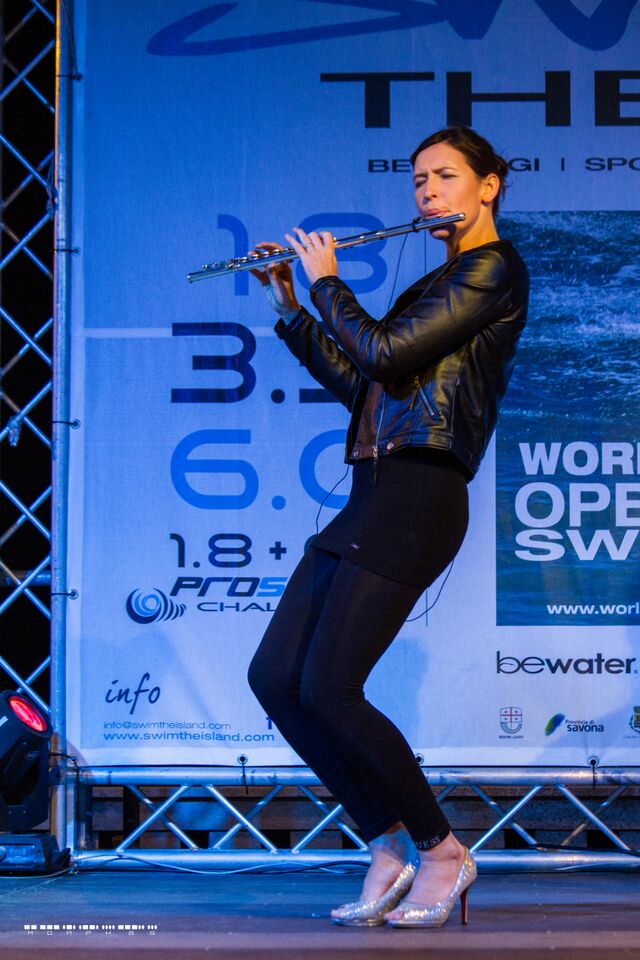 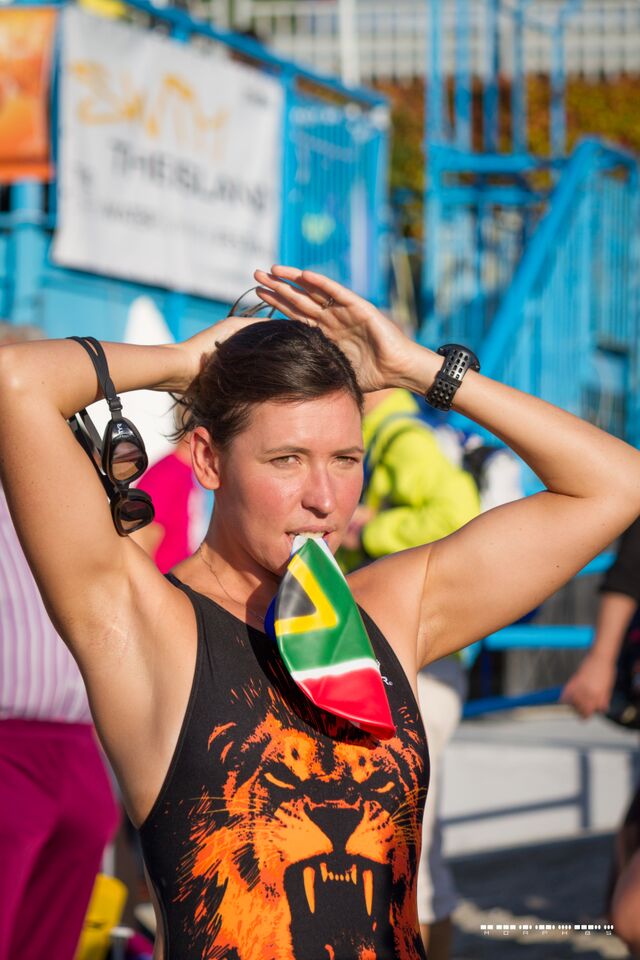 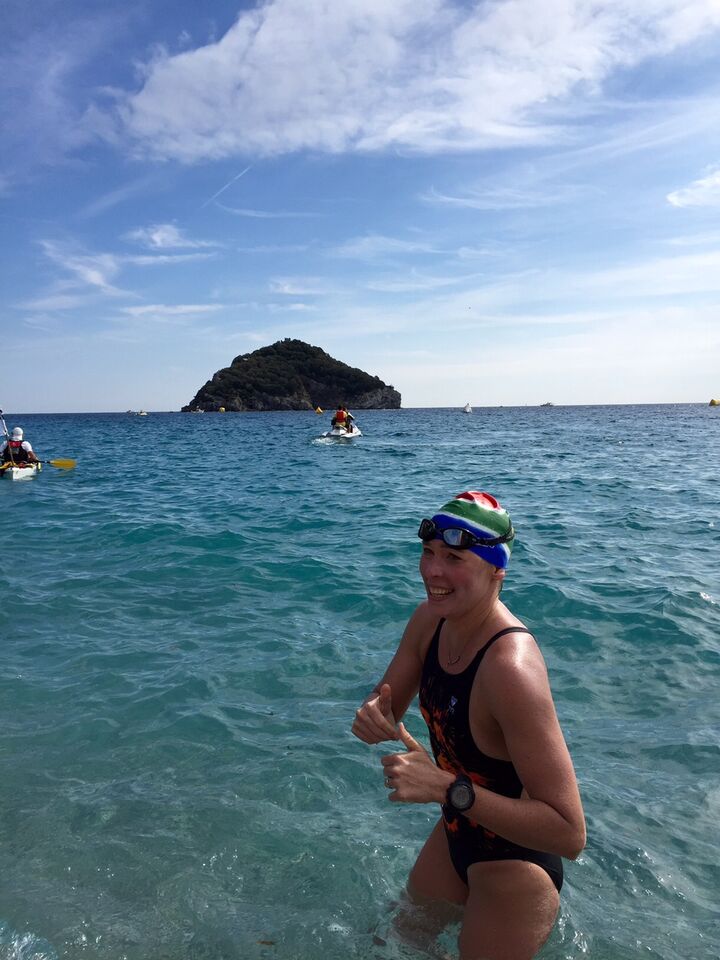 Of the more than 2,000 swimmers who participated in the SwimTheIsland event in Bergeggi, Italy, there was one swimmer who pulled double-duty.

While there are a number of race directors who also swim in their races, there are only a very small handful swimmers who also entertain their fellow competitors at an open water swimming event.

But Carina Bruwer, a South African marathon swimming veteran and the lead contemporary flautist of the instrumental pop group Sterling EQ, is a unique individual.

She not only competed swam multiple laps of the Swim The Island race course – 21 km in total – but she also led Sterling EQ‘s debut performance in Italy the night before in front of her fellow swimmers. She also raised money for her favorite charity, the Little Fighters Cancer Trust.

Bruwer’s solo swim was a special feature at the annual SwimTheIsland race in the province of Liguria. In a few short years, Matteo Testa has organized one of Europe’s larger open water event with over 2,000 swimmers competing in distances ranging from 800m to 6 km. “We invited Carina as an international celebrity to endorse the race for the second year,” explains Testa. “We aimed to complete 18 km by swimming multiple laps of the race route, to raise funds for the Little Fighters Cancer Trust, the South African charity that is the sole beneficiary of her “Swim For Hope” project.

When she had finished 18 km, she announced to the excited crowd that she would swim an extra lap to raise additional funds, despite having suffered multiple jellyfish stings. She ultimately completed 21 km in 6 hours 25 minutes and 58 seconds.”

“I felt great after 18 km. I knew that I had the crowd’s attention when I came out as this was going to be the end of my swim. As they were cheering and the presenter started to interview me, I suggested swimming another lap for the Little Fighters in South Africa,” explained Bruwer.

“The crowd went crazy and started donating Euros there and then. I swam an extra 3 km to reach a total distance of 21 km, and could hear the cheers from a distance as I approached the finish – it was amazing, and it certainly numbed the pain from the more than 20 jellyfish stings.”

As an expression of their gratitude, Bruwer was awarded il Golgo dell’ Isola’s symbolic honorary citizenship by the Mayors of Spotorno during the post-event award ceremony.

Sterling EQ’s other two members, Ariella Caira and Luca Hart, supported Bruwer from the beach. They worked her swim online, lobbying for support through regular updates and image postings. The SAMA award-winning trio performed at the opening of the event on Saturday night on the piazza in Spotorno to a capacity audience consisting of participants, supporters and members of the public. “It was fantastic to share the experience with Ariella and Luca,” says Bruwer. “It is the first time that Sterling EQ and my swimming share a platform, and it certainly attracted a huge amount of interest – we have a whole new all-Italian fan base.”

Since 2013, Swim For Hope has raised over R250,000 including the nearly R20,000 raised so far from SwimTheIsland. Money raised through SwimTheIsland goes towards the Christmas Elves Project, through which a Christmas Gift is provided to every pediatric oncology patient on 15 hospital’s patient lists across South Africa. They will also aim to buy groceries for struggling families affected by child cancer, as well as gifts for the siblings who often feel abandoned due to the crippling effect which child cancer has on the family.

This swim adds another feather in Bruwer’s cap after generating significant media coverage by being named as one of Cosmopolitan’s Awesome Woman in 2005, Glamour Magazine’s Women We Love in 2005, and Sports Illustrated’s Top 10 Beauties of Sport. She was also the focus of a Gillette World Sport project and will be featured on CNN’s African Voices this November. 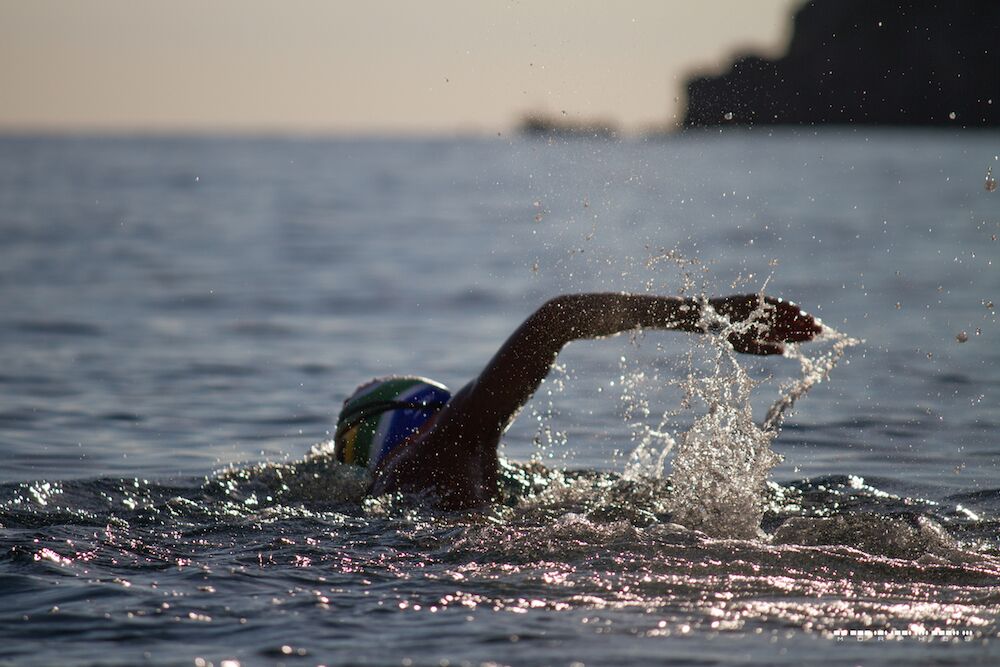 Bruwer has done the following swims:
*crossing of the English Channel
*35 km crossing of False Bay in South Africa
*fastest female swim across the Strait of Gibraltar for 5 years
*overall record for the fastest swim around Robben Island
*female record for the Cape Point swim
*only swimmer to have rounded both the southernmost and the northernmost tips of Africa
*only person to swim around Danger Point
*longest swim by a female in the Strait of Messina (four-way crossing of 15 km)
*created the Swim For Hope project [ongoing]

Sterling EQ is a South African instrumental pop group lead by Carina Bruwer on flute, with Luca Hart on electric violin and Ariella Caira on electric cello. The three-piece has performed over 900 shows in 12 countries, released 3 albums and a live DVD, and won 3 major music awards, most notably a 2011 South African Music Award.