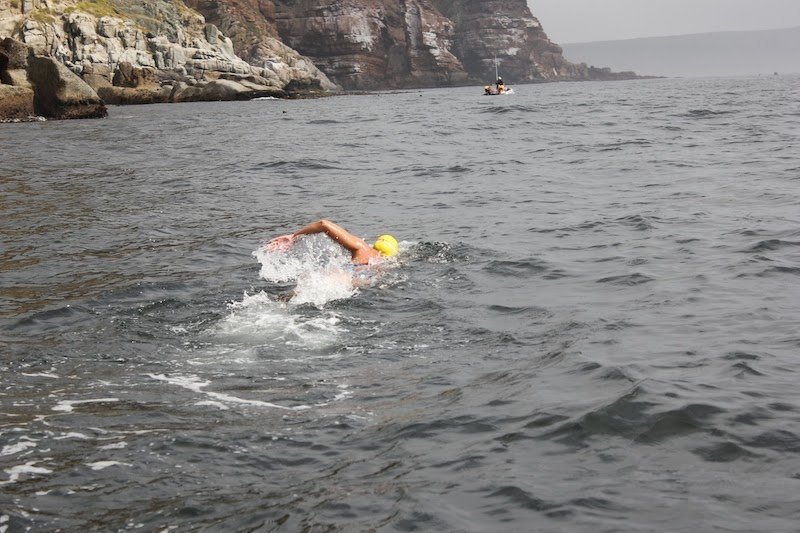 Carina Bruwer will take her Swim For Hope project to Europe this month. The mother and lead player of SAMA Award-winning instrumental pop group Sterling EQ will undertake two crossings in Italy in support of the Little Fighters Cancer Trust, a South African organization that supports children with cancer and their families.

On June 15th, the mother-musician-marathoner will attempt a 15 km crossing of the Strait of Bonifacio between Corsica (France) and Sardinia (Italy). If successful, this will make her only the fourth swimmer to complete this crossing after a trio of British swimmers were the first to do so in 2013.

With only 4 days rest, she will next attempt an unprecedented 14 km quadruple crossing of the Messina Straits between Sicily and Calabria. If successful, Bruwer will become the first woman to cross this unpredictable waterway more than twice. For this swim, she will be joined by Irish marathon swimming legend Ned Denison. The pair are a likely duo as both of them are among only five people in history to have swum the notorious 36 km False Bay in the presence of great white sharks.

Bruwer is on a relentless schedule as she raises her children while headlining Sterling EQ on domestic and international tours and spearheading Swim For Hope through her solo and group ocean swims. “I am now dedicating a large portion of donations to Little Fighters Cancer Trust by swimming under the Swim For Hope banner. Childhood cancer has a desperate effect on the whole family like no other cancer. There are many people – especially sufferers themselves – rallying and doing amazing work for breast cancer and other chronic diseases, but children do not have the same voice nor the ability to spread awareness, making it incredibly challenging for childhood cancer fighters to get the message across and raise much needed funds. Having two perfectly healthy children myself, I simply could not remain untouched by the Little Fighters Cancer Trust’s work and the cause, and making a small difference to them has made a big difference in my own life. In South Africa, the limited resources are shared between AIDS, adult cancers and diseases such as tuberculosis and malaria, with child cancer being in dire need of awareness campaigns and support structures. I’m therefore hoping to create some international awareness and support through my European swims.”

Mandie Erasmus, Little Fighter’s project manager, commented, “It amazes me every time that Carina steps up for our cause, at times braving dangerous conditions, to promote childhood cancer awareness and raising funds for the work we do. Childhood Cancer is a silent killer in South Africa. Less than a third of actual childhood cancer cases in South Africa are diagnosed annually, mainly due to a lack of awareness. In the Developed World, which includes Europe and the U.S., the success rate of childhood cancer treatment is between 80 and 90%. South Africa shares the success rate of the Developing World, which is a mere 10 to 20%. This should not be, as 70% of all childhood cancers are 100% curable if diagnosed in time. Carina and Swim for Hope, gives the Little Fighters Cancer Trust and the children of South Africa a Voice. Having a Voice, will lead to increased awareness, which in turn will lead to more children being diagnosed, and the entire aim of awareness, is to save lives.

Public as well as corporate contributions are encouraged and can be made here at Swim For Hope. For more information, visit Swim for Hope.