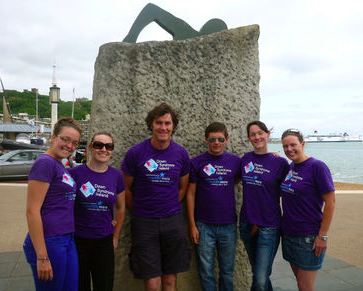 “Carol has been one of the leading marathoners in Cork Ireland for the last few years,” observes Ned Denison.

“She is fast, pushing her distances. She swims in Myrtleville and Sandycove Island and was voted the 2016 Volunteer of the Year in 2016. Her Triple Crown of Open Water Swimming is well earned.”

Cashell had experience in the English Channel. In 2013, she was a member of the the English Channel 2-way relay team called Crosóige Mara [shown above], which also included Maeve Ryan, Owen O’Keefe, Eoin O’Riordan, Caitlin Desmond, and Lynne Lynch. Under the escort of Michael Oram, the team took 20 hours 29 minutes, a new Irish 2-way relay record by over 40 minutes where they raised €13,250 for the Down Syndrome Ireland charity and advocacy group.