The Case of the Murderous Mermaid 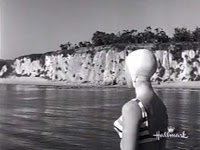 In March 1965 during the eighth season of a popular Perry Mason television series, episode #234 saw the fictional detective starred in an episode called The Case of the Murderous Mermaid.

In this episode, former swimming champion Victoria Dawn is overweight, out of shape, and the owner of a chain of failing health spas. Desperate to regain some of her former glory, she hires a beautiful young actress Reggie Lambert to impersonate her in a swim across the Catalina Channel to Los Angeles. 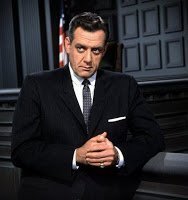 Reggie wants to get some recognition and make some money, but she runs into trouble along the way in her swim when her boat blows up. The boat captain Charlie Shaw is not seriously hurt in the intentional explosion, but when Victoria is found dead in her home, Reggie is arrested.

In a typical who-done-it episode of that era, Perry Mason tries to resolve the situation as the episode generated interest in the American marathon swimming community in the mid-1960s.

Jean Hale played Reggie during the episode, but who was the stand-in swimming model for Reggie in this episode?