Cashing In At The Flowers Sea Swim 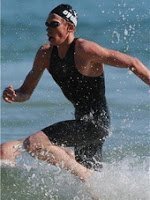 They all will be at the 20th annual Flowers Sea Swim. As Crocker says, “This is the only open water swim that I do. It is wonderful event.”

Over 25% of the 860 entrants are flying in to the Cayman Islands from a foreign country to take part in the world’s richest sea swim. With over US$100,000 in randomly awarded prizes, from airline tickets Miami, New York, Panama, Rome, London, Dublin, Los Angeles, Rio De Janeiro, and Toronto to mobile phones and dining vouchers, to it is no wonder the Flowers Sea Swim is truly one of the world’s finest destination swims.

20 years in the making, finishers are guaranteed 1-in-4 random prize odds. The random prizes are awarded immediately after the race where the 860 swimmers anxiously await their names being called.

But Codie Grimsey (shown above) and Joey Pedraza are looking for the biggest prize of all. But they will need to earn it in the point-to-point straight-line course along Seven Mile Beach.

The lanky Australian and the American from the University of Florida will be looking to break the 16:00 record for the world’s fastest recorded ocean mile … to earn the US$10,000 cash award. Another US$5,000 is up for grabs if they break the course record of 17:18.

On the women’s side, with so many Olympians, including Janelle Atkinson-Wignall (Jamaica), Rada Owen (USA) and Heather Roffey (Cayman Islands), pushed by some savvy ocean swimming amateurs, the women’s records (17:21 world record and 17:47 course record) also may tumble if the conditions are just right.

The conditions that Grimsey, Pedraza, Atkinson-Wignall, Owen and Roffey are looking for are tranquil seas with a slight breeze at their backs aided by a slight tidal pull towards the finish. The weather forecast looks promising for Saturday’s race.

With all the Olympic gold, cash and prizes on Seven Mile Beach with the Flowers Sea Swim this June 9th, there are certainly riches at the end of this Caribbean rainbow.