Castaic Lake Welcomes The Best America Has To Offer 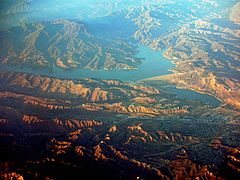 The 2013 USA Swimming National Open Water Swimming Championships this coming week will not only be the fastest and most competitive open water swimming race in the history of the United States, but it will also be the easiest and most convenient to follow.

Set within a natural amphitheater where the venue sits low surrounded by rolling hills in Castaic Lake, parents, coaches, and teammates will be easily follow the race from start to finish. At times, the swimmers will be so close, the spectators will be able to read their numbers…not only on their shoulders, but also on their hands.

“The neat thing about our lake and this course is that it will be very close to land in several spots,” explains Ron Mita. “So fans can view it from the shore.”

We asked Mita about the only national championship to come to Santa Clarita:

Daily News of Open Water Swimming: What was the impetus to bring the USA Swimming championships to Castaic Lake?
Mita: About 10 years ago Canyons Aquatic Club decided it was time to grow. We had a new training complex, the Santa Clarita Aquatic Complex. We took advantage of the opportunity to start hosting large events. Our goals got loftier each year, from a Summer Age Group Championship, to several years of the Junior Olympics, and then regionally to the Summer Sectionals.

We rewrote the book on meet hosting and the results were remarkable. We were one of the first clubs to webcast our swim meets. We got the Liveswim.net team started at our events. Ask anyone who has attended a Canyons hosted meet and they will tell you how much they enjoy the experience. Around the same time our past head coach Jeff Conwell and our current Head Age Group coach Jeremy Anderson got interested in open water and we started sending swimmers to nationals and other regional events.

Our sectional committees added open water a few years ago and we hosted our first open water event in 2010 at upper Castaic Lake, a feat we repeated in 2012. The interest in open water grew fast on our club. An associate club, H2OpenPlus evolved getting more of our younger swimmers interested in open water swimming. This brings us to last fall when we got word that USA Swimming wanted to come west for the open water. Using everything we’ve learned in swim meet and open water hosting, we bid and received the event. We plan on bidding again if the USA Swimming is interested in coming west again

Daily News of Open Water Swimming: How has the local community responded?
Mita: This is a strong aquatic-minded community. Our club has nearly 600 swimmers and having been in the community for 35 years, everyone has a friend or relative who swam with us. When we were announced as the host, we got great feedback from the City of Santa Clarita. They are very big on sports tourism and while this event is small in numbers, it is the first real national championship to be held in the area ever so that is a source of community pride.

The lake is technically not in the City of Santa Clarita, as the town of Castaic is unincorporated Los Angeles County. Still, the City of Santa Clarita has been a generous sponsor offering us pool time for visiting athletes and donating equipment and advice. Their counterparts in Los Angeles County Parks and Recreation have also extended their generosity as will be evident at the event by the sheer volume of lifeguards and lake personal that will be on hand.


Daily News of Open Water Swimming: Are the kids on Canyons Aquatic Club excited?
Mita: We have nearly 600 kids on the club, most of which are under 14 and their coaches have been doing a great job getting them pumped for the event. To add to the fun, Canyons is working with H2OpenPlus and the Fran Crippen Elevation Foundation on a Wednesday night pre-nationals race on the course. We expect the majority of those competitors to be Canyons swimmers. On Saturday the club is hosting an open water clinic with Mark Warkentin and the Fran Crippen Elevation Foundation. This is squarely aimed at the youth swimmers although we are glad to have any swimmer of any age attend. So, to answer the questions simply, yes. You can expect a lot of Canyons kids at the Sunday race. We love our logo and you can expect to see it t-shirts all around.

Daily News of Open Water Swimming: Castaic Lake is actually separated into two bodies of water. Why are the championships in the lower lagoon instead of the massive upper lake?
Mita: The main reason for this was logistics. We’ve hosted two open water events on the upper lake and it is nothing short of impressive. However, the upper lake is a power boating recreational lake and that limits our ability to shut it down for extended period of time and would require us to take the course off the lake each day. Moving to the lower lake gives us complete control. There are no powerboats on this lake, just a few lonely fishermen. We are able to establish our beach camp and our course on Wednesday and keep it up all week. This gives our visiting athletes several opportunities to train on the national course. Even better the lower lake allows spectators very close access to the race. The lake drops off in depth dramatically just a few feet from shore so we’ve planned the race to stay very close to shore. Even the feeding station will be land based as it only has to stick out in the water a few feet. We’ve very excited about the location of the finish which will be about 15 feet off shore and still in deep water. If it’s an exciting race, everyone will have a great view. Lake temperatures are about the same between both lakes, around 68ºF (20ºC).