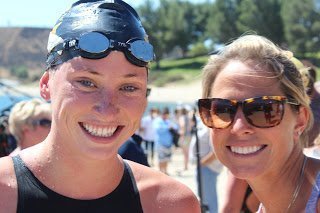 Since 1978 no one has had the influence of open water swimming in the USA Swimming community like USC and Trojan Swim Club coach Catherine Vogt.

A trailblazer, she was awarded her fourth unprecedented Glen S. Hummer Award, a award given to the person or group making the greatest contribution to open water swimming among USA Swimming members.

In 2005, Vogt won as a USA Swimming national team assistant coach at the FINA World Championships in Montreal, Canada.

In 2013, Vogt won unilaterally as the USA Swimming head coach at the FINA World Championships in Barcelona, Spain.

Her fourth career recognition was given to her at today’s United States Aquatic Sports Convention in downtown Atlanta and to her swimmer, Haley Anderson from Granite Bay, California and Trojan Swim Club and Jordan Wilimovsky from Malibu, California/Team Santa Monica) were named USA Swimming’s Female Open Water Swimmer of the Year and Wilimovsky received the Fran Crippen Male Open Water Swimmer of the Year accolades. Wilimovsky repeated as the USA Swimming Swimmers of the Year while Anderson has won the award five consecutive years.

One of the awards given is the Glen S. Hummer Award that was established in 1978.