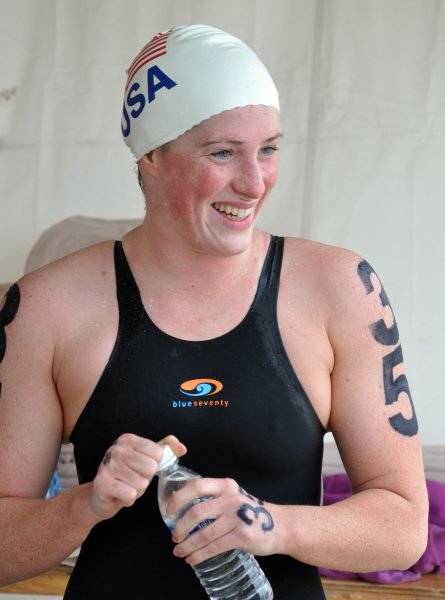 In an address to the global aquatic family in FINA’s Aquatics World Magazine, FINA President Julio Maglione spoke favourably of the 14th FINA World Championships that were held in Shanghai, China in July.

“…the competition in the FINA sports (Swimming, Diving, Water Polo, Synchronised Swimming and Open Water Swimming) is more interesting than ever, with an increasing number of nations capable of shining at the highest level. This brings more visibility and popularity to the aquatic disciplines and considerably raises the media coverage of our major competitions and great stars.”

While his statements are true, we were surprised how few media representatives participated in the post-race press conferences showcasing the open water swimming stars in Shanghai. Media outlets like BBC expertly and widely covered Keri-Anne Payne’s victory in the 10K race, providing live coverage during her dramatically courageous swim and extensively reporting on her eloquent and heartfelt statements after the race.

However, there were several press conferences where the world’s greatest open water stars were talking to a nearly empty room. On more than a few occasions, there were fewer than a handful of reporters in the media room.

But like channel swimmers who normally finish their crossings before a small support crew on a shoreline without fans, friends or family, the lack of media attention seemed not to bother these athletes. Among those few who were present, their pride and self-satisfaction were clearly evident among the open water swimming medalists.

Their smiles were genuine and brilliant. Their descriptions of their races were colorful and fascinating. They were frequently humorous and profound, and always humble and respectful of their fellow medalists and global competitors.

It was clear they swim for self-determined goals and appeared to be just as proud and happy for themselves in an empty press room as they would be in a room of inquisitive reporters and focused photographers.

They dazzled with their smiles. Their eyes welled up with sincere gratitude aimed at their coaches and rivals who pushed them to greatness. Their sincerity was a joy to witness as their goggle marks remained deeply etched around their eyes and lanolin lingered on their necks.

Simply put, they presented themselves very well as able young ambassadors of the sport.

Listen to a channel swimmer quietly yet confidently describe their thoughts and physical exertion during a swim and the same profoundly colorful words can similarly light up an empty room. Without a selfish or conceited need to puff out their chests, their words can easily generate a roomful of inspiration and respect.

To all those who venture past the shorelines and challenge themselves, their victories – either performed on the world’s stage or done in a private adventure – are to be saluted.