Chad Ho, Swimming Out Of The Dark 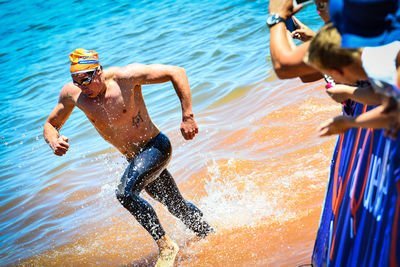 Next February 14th, Chad Ho will go for his seventh consecutive victory at the upcoming aQuellé Midmar Mile in Pietermaritzburg, South Africa, attempting to equal the record set by Keri-Anne Payne.

Like other things during his career, nothing will come easy or will be a given for the South African open water star.

While Ho has to travel far to compete in FINA World Swimming Championships, the FINA Marathon Swimming World Cup circuit and the Olympics, the South African has plenty of domestic opportunities to develop the skills and strategies to become a fierce competitor on the world’s stage.

Ho was the youngest male competitor in the inaugural Olympic 10K Marathon Swim in Beijing and a past nominee for the World Open Water Swimming Man of the Year, but his road to the Olympics and a world championships medalist could have been derailed early in his career.

Ho truly had to call upon the depths of his competitive spirit in 2008. Up with the leaders in the first Olympic 10K Marathon Swim qualifying swim in Spain, the 17-year-old was inadvertently kicked in the eye so hard that he got his cornea scratched. The blow was so hard with the heel of a foot of a competitor that he quickly fell out of contention from the top tier to 34th. As he finished with a swollen and injured eye, Ho couldn’t shed a tear as his Olympic dreams evaporated in an instant.

There was a second change to qualify for the Olympic 10K Marathon Swim in a qualifying swim a few months before the Olympics, but Ho was told to stay still in a darkened room for weeks until his wounds had a chance to heal. As he kept still lying in a bed in a darkened room, Ho only had a chance to focus on his mental training. Physical work and training were out of the question.

But Ho emerged from his dark room hungrier for the experience.

In the second qualifying race, Ho found himself uncharacteristically down towards the back of a tight pack of 15 swimmers around the last turn buoy. Calling upon reserves and the mental fortitude that he had built up lying in a room for weeks, Ho turned on the jets and the tables of his fortune, sprinting to fourth and guaranteeing his spot in the 2008 Olympics.

Dial forward to 2016 and Ho will face his next chance to make the Olympics at the qualifying race in Setubal, Portugal in June.