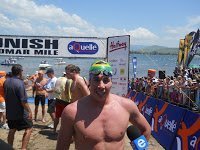 After the 400-meter hot spot, Chad started to chip away at the lead and was leading by the mid-way point.

But Olympic silver and bronze medalist David Davies was charging hard and made Chad swim hard for his victory. They were both swimming at a furious pace, but on completely different lines to the finish. The 10K race that David won a few days ago may have taken some energy out of him, but Chad was “like a knife cutting through butter” commented Neville Smith. “He looked really good swimming strong through the [surface] chop.”

Chad held off David who was charging fast and won in front of an appreciative South African crowd for his second-straight victory at the prestigious Midmar Mile. Olympic gold medalist Penny Heynes interviews Chad immediately after his victory: