The Challenge Of The Pacific Decadal Oscillation 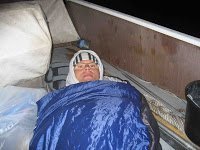 The Catalina Channel Swimming Federation provided a timely explanation for the colder waters that open water swimmers have been experiencing this season in the Pacific Ocean.

The Federation explained the scientific reasons for the colder waters: a Pacific Decadal Oscillation that is currently in a long-term cooling phase.

The Oscillation is a naturally occuring fluctuation of the Pacific Ocean surface temperatures that appear in cycles every 20 to 30 years.

While the scientific community still does not completely understand the reason for the water temperature fluctuation, it is a fact that the open water swimming community and the Catalina Channel community enjoyed the warmer waters that were the general rule throughout the 1980s and 1990s. But the Catalina Channel will present on ongoing challenge as some scientists believe the Oscillation has switched to a significant cooling trend as of 2008 with the water temperatures in Southern California at least 4°F below normal.