The International Marathon Swimming Hall of Fame recognizes the efforts of the most accomplished open water swimmers.

There are four general types of swimmers:

1. The Champions
2. The Adventurers
3. The Record Holders
4. The Endurers

Each of these types of swimmers have significantly added to the annals of open water swimming history – and are representative of each and every individual who ventures past the shoreline.

The Champions are those swimmers who are fastest in head-to-head competitions against other great open water swimmers. Abdel Latif Abou-Heif of Egypt in the 1950s, John Kinsella of Indiana in the 1970s, Paul Asmuth of Mission Viejo in the 1980s and Maarten van der Weijden of the Netherlands, are examples of these Champions.

The Adventurers are those swimmers who have done unprecedented swims of historical proportions. Lynne Cox’s famous swim across the Bering Straits or Stewart Evans’ unprecedented swim from the Farallon Islands to the California mainland are just two examples of the exploits of these Adventurers.

The Record Holders are those swimmers who break records of acknowledged distances. Penny Lee Dean of California and Petar Stoychev of Bulgaria are two accomplished swimmers who set the bar by breaking the English Channel record. While there is always some luck in swimming in the right conditions (currents, wind, water temperature), there is no doubt that these Record Holders are to be held in the highest esteem.

The Endurers are similar to The Adventurers and include those swimmers who chose to swim the longest and furthest in terms of absolute distance and/or time. These swimmers include people like David Meca who took over 24 hours to swim from Spain to Ibiza, an island in the Mediterranean Sea and Penny Palfrey who swam 68 miles from Little Cayman Island to Grand Cayman Island. What drives these individuals to push past all mental and physical barriers during these lengthy and difficult swims is the stuff of legends.

The Champions, The Adventurers, The Record Holders and The Endurers: they are all worthy of the ultimate admiration in the world of open water swimming. 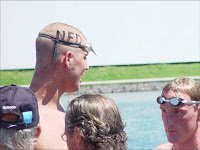 Maarten van der Weijden, one of the most engaging and inspirational personalities in the open water swimming community, will be honored at the International Marathon Swimming Hall of Fame on September 22nd in Long Beach, California. At 6′-7″ (202 cm), Maarten is a giant of a man for more than his open water exploits.

Maarten’s incredible story is well-known throughout the sporting world.

In 2001, he was diagnosed with Acute Lymphatic Leukaemia and had to undergo chemotherapy and a stem cell transplant at the age of 20. In his autobiography, he talks about cancer. “In Lance Armstrong’s book, he talks about fighting the cancer and being desperate to get back on his bike, but I didn’t feel like that. I was lying in my hospital bed feeling at peace with which ever way it would go. I didn’t think I would ever swim again. After my treatment, I lost [28.6 pounds], I couldn’t sit, stand or anything. Two weeks after getting out of hospital my mother persuaded me to go swimming again, to enjoy the feeling of being in the water and start to get back into some sort of shape again. I hadn’t even thought about a come back at that stage. I would look at my body in the mirror all the time and wonder if I was getting better or whether the cancer would come back, but in the pool I didn’t feel any fear that the cancer would come back. I felt relaxed and happy in the water.”

Towering above his fellow competitors, Maarten famously never hesitated to share his secrets, training and experience with other swimmers who asked. As competitive and driven as athletes come, Maarten continued to look at the big picture. He was kind, patient and encouraging to everyone, including those who had the potential to defeat him.

But it was Maarten who defeated cancer – and the rest of the open water swimming world and greater community benefits for an outstanding member of the Class of 2011 of the International Marathon Swimming Hall of Fame.