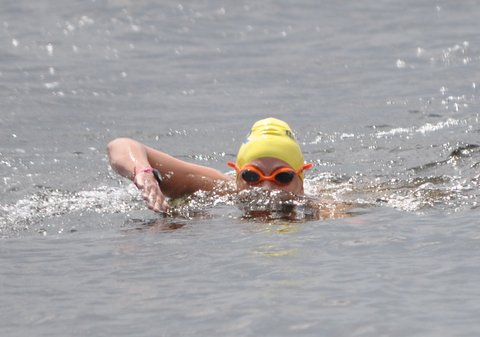 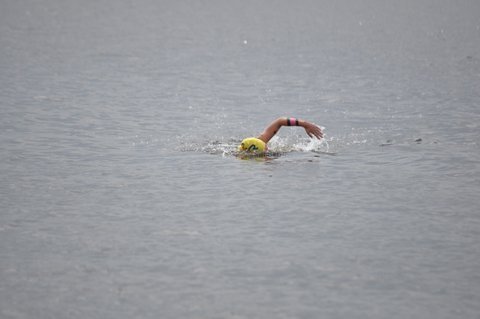 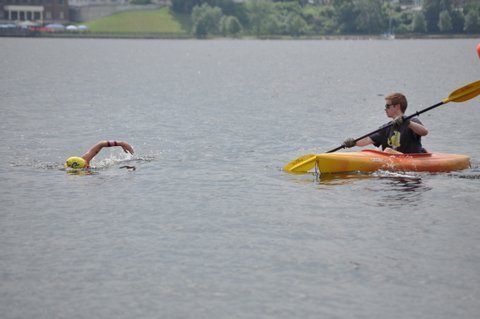 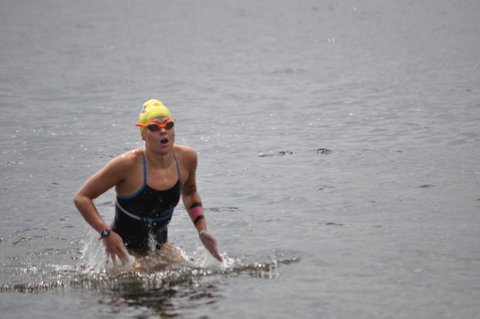 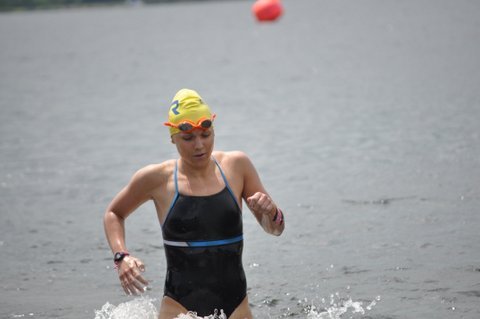 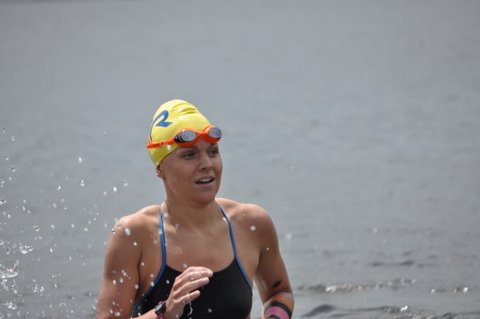 After reeling in the leaders including Emma Otto-Moudry over the second half of the 16.2 km course, we asked Jones about the Kingdom Swim.

Daily News of Open Water Swimming: How did you feel before the 10-mile Kingdom Swim?
Kristin Jones: I have been looking forward to swimming here for the past couple months. I competed last month in the Swim Around Key West, but I was horribly seasick the entire swim. I was just glad I finished it. I was looking for a great swim to take my mind off of that one.

Daily News of Open Water Swimming: How did you feel in the second half of the race?
Kristin Jones: Before starting the swim, my game plan was to control my pace for the first half, and then decide how to pace depending on how I felt at around the 2-hour mark. I found myself watching the time waiting for the two-hour mark. I felt fantastic. I just wanted to get halfway so I could speed up. I think it worked perfectly for me. I am still figuring out how to pace a marathon swim, but every race gets better!

Daily News of Open Water Swimming: How did you get over the fatigue during the race?
Kristin Jones: I think preparation for a swim of this length is essential. I started preparing last September or October when I decided to start marathon swimming seriously. Like I mentioned earlier, I competed in the Key West swim last month, that was a 12.5-mile swim but I was seasick and unable to swim to my capabilities. It was disappointing there, but I was happy I finished. After that disappointment I was really looking forward to Lake Memphremagog. I knew it would be calmer, cleaner water, much better water and air temperature and the fact that I normally swim in lakes. Swimming where you’re most comfortable is always an advantage.

Daily News of Open Water Swimming: What did you eat or drink? How often?
Kristin Jones: Hah, actually I kind of winged my nutrition and feedings for this race. After completing a grueling 12.5-mile ocean swim with virtually no nutrition. I knew I didn’t need to over-think this aspect of the race.

I wanted to stick with what my body is most comfortable with, nothing too fancy. I had a bag of bite-size Snickers bars with me, three water bottles (two with electrolyte water in them), some ginger ale, and a 32 oz. bottle of Gatorade.

I planned to stop about every half hour, but I would be flexible with this standard depending on competition and how I was feeling. I ended up stopping roughly every 20-45 minutes. I ate a Snickers every time I stopped and drank some type of liquid. For the first two hours I drank only Gatorade, then switched to water. I also had some ibuprofen for good measure. I did crave some applesauce, which is something I have had during training swims, next time i’ll be sure to pack some

Daily News of Open Water Swimming: Did you and your kayaker talk during the race?
Kristin Jones: My kayaker and I communicated throughout the race, absolutely! He is my boyfriend’s younger brother. I think he was a bit nervous for the race but honestly, he was able to navigate and guide me straight to each buoy, I think that helped a lot throughout the swim.

Daily News of Open Water Swimming: What was your strategy versus your competition?
Kristin Jones: My strategy was to listen to my body. A marathon swim is a long and difficult race, if you expect your body to be able to do one thing, and it’s not able to – the mental toll is incredibly taxing. Speaking from experience, it can make you want to pull out of the race completely. So, instead of expecting to win and have an incredible race every time I compete, I decided I would go in prepared for the worst and expect the unexpected. For me, I had a wonderful race, I felt it during the swim and am still basking in the after affects of swimming a solid 4 hours in a lake. I mean, my body hurts and I still haven’t felt full, but I love that! The unpredictable nature of open water swimming is what draws swimmers to it, it’s what keeps us here. We love the challenge, we love to adapt to the challenge. Going in with no expectations was my strategy because I know i’ll always exceed them.

Daily News of Open Water Swimming: How did you feel after the race?
Kristin Jones: I was starving after the race, I walked out of the water and straight to the lunch spread. I felt the same way after my Key West swim, it was shocking how much food I was able to eat after the swim. The day after the swim was rough, my joints ached. Mostly my shoulder and hip joints hurt. It was hard to use my arms, I imagine this is kind of how marathon runners feel, except these are swimming muscles.

Daily News of Open Water Swimming: What are your next open water swimming goals?
Kristin Jones: I have been competing to raise awareness for an organization called FARA. I have been using my swimming to raise awareness about a genetic, life-shortening, debilitation disease that two of my brothers have – Friedreich’s Ataxia. Before I swam the Swim Around Key West race, I raised over US$5,000 and since then I have raised an additional US$600. I plan to keep raising awareness and funds through my swimming. Here is a link to my Friedreich’s Ataxia Research Alliance fundraising page, as well as two articles outlining the efforts myself as well as others have made to honor Ryan and Owen (my brothers):

My next swims will take place on August 3rd and 4th in Sitka, Alaska and Ketchikan, Alaska. I will be competing with my mom and younger brother (who is 16 and not affected) in a 5K at the Sitka Sound Adventure Swim, then the next day I will compete in the Pennock Island Challenge as a solo swimmer (8.2 miles). I’m looking forward to racing locally again, my last couple swims have been far from home and I am missing all the local support I feel when I am home.