Channel and Marathon Swims in Japan

The Far East is so far away.

But island nations like Japan present a number of wonderfully challenging opportunities for ocean swims from the tropical waters of Okinawa to the challenging waterway of the Tsugaru Channel.

For swimmers who wish to visit the Far East and swim across lakes, between channels and around islands in Japan, Ocean Navi is an open water swimming-focused group of supporters who have helped dozens of Japanese adults swimmers, foreign guests and masters swimming teams achieve their dreams in Japan. 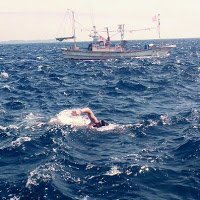 These individuals include Stephen Redmond of Ireland, the first person to complete the Oceans Seven, and Darrin Miller of America. Ocean Navi provides full (on-land) logistical and (in-the-water) navigational support to individual swimmers or teams who want to swim in waters around Japan.

In its short history under the direction of ocean swimmer Masayuki Moriya, Ocean Navi has supported nearly 110 swimmers to date who have swum in the Tsugaru Channel (19.5 km between the islands of Honshu and Hokkaido), 30 swimmers across the Sado Channel (45km between Sado Island and the mainland of Honshu), crossing Suruga Bay (22 km with Mount Fuji in the background), crossing between Izuinatori and Oshima (30km), and in Onjuku (4 km).

Ocean Navi has also guided groups up to 40 swimmers in specialty ocean swims and camps in Borneo (14km) and the Philippines (4 km). 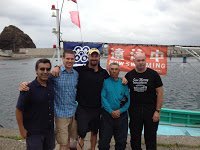 In 2013, Ocean Navi has the following dates scheduled for swimmers who want to attempt a crossing of the Tsugaru Channel: June 2nd and 17th, July 1st and 17th, August 1st, 15th and 30th, September 13th and 27th, and October 12th and 27th. Ocean Navi tackles the Tsugaru Channel from the best course possible, the Western Peninsula. It has the full support of the Japanese Coast Guard and its pilots are proven navigators. Its top mariner, Captain Mizushima (between Redmond and Miller) is an experienced fisherman who lives right at Tappi Misaki on the channel who has a success rate of nearly 90%.

Masayuki Moriya has crossed the Tsugaru Channel himself (in a wetsuit) and is a member of the Japan Swimming Federation Open Water Swimming Committee and the Promotion Council of Japan Disaster Relief NPO as well as the race director for several ocean swims in Japan.

He is assisted by International Marathon Swimming Hall of Fame Honour Swimmer and Vice President Yuko Matsuzaki whose father was formerly the director of the Japanese Coast Guard. She is a Director with World Open Water Swimming Association and Honorary Japanese Consul Executive Secretary.

Communications in English to Ocean Navi can be directed to Matsuzaki-san here. English translators in Japan are available and hotel accommodations are reserved in advance at hotels overlooking the Tsugaru Channel or other convenient locations in Japan. Ocean Navi provides all the necessary equipment for channel crossings with the exception of the swimmer’s preferred foods and drinks. All safety items, cooler boxes, thermometers, anemometers, stopwatches, GPS units, and video cameras are provided.

Ocean Navi also takes care of the necessary documentation for the Japan Coast Guard and the local fisherman’s union so everything is taken care of for the swimmer.

The land of the Rising Sun awaits.