Channel Season Starts Off Nicely In The Cook Strait 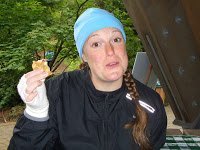 Reports in from the Cook Strait that the channel swimming season got off to a roaring start in 2010 with three successful swims in Cook Strait over the last 48 hours. Michelle Macy and Steve Junk plowed through rough seas to finish in slightly over 8 hours. With the incomparable Philip Rush at the helm as coach, both Michelle and Steve were in good hands.

“The waves seem to bump me in every direction (near the finish)…with the winds (up) to 15-17 knots, it was causing a lot of chop and some white caps. The sun was out which created a warming sensation on the back and the water was a really nice temperature. There was no real sea life to speak of, but I really was hoping for the dolphins that Philip and Mike talked about. Just a few odd jellies and some kelp and that was it,” wrote Michelle on her blog.

The dual crossing was followed by Emily Morris‘ 9 hour and 58 minute swim. Emily, a guide with SwimTrek and reportedly the first British woman to cross from South Island to North Island, did the swim to help raise funds for a disabled chair hoist for the YMCA London South West and Hampton Pool Trust.

With more people attempting the Cook Strait, the Strait of Gibraltar, the English Channel, the Catalina Channel, the Tsugaru Channel, the Molokai Channel and many other swims before in open water swimming history, the success of Michelle, Steve and Emily bode well for the rest of the community.