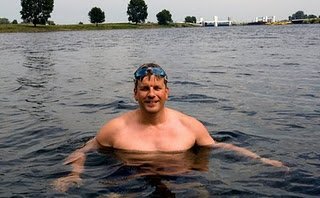 Milko van Gool is on the move again.

The Dutch open water swimmer completed the English Channel in 2011 (10 hours 22 minutes), crossed Lake Malawi in 2013, and set the men’s record for crossing the North Channel from Ireland to Scotland this July in 10 hours 34 minutes. Professionally, van Gool is employed by the European Commission and has been assigned a number of difficult assignments in various locations around the world.

He was previously the Head of Development Cooperation with the EU Delegation to Bangladesh where, among other things, he helped reduce the number of drowning fatalities among Bangladeshi children by providing information and swimming lessons among the children of the poorest population (in Bangladesh 47 children per day die of drowning).

Van Gool was recently assigned to manage development aid in Kabul, Afghanistan as Head of Development Cooperation at the European Union Delegation to Afghanistan. “I will try and visit projects in the field whenever security permits, which is not often, but I manage a 36-strong team of European expatriates and Afghan team members in the Delegation in Kabul. EU projects are mainly in the area of good governance, agriculture, and security reform. The budgets are very big: 200 million euros a year disbursed on average.

My key tasks include financial and performance management of a huge portfolio, team management, and liaising and coordination with the Afghan government and the many other donors active in the country
.”

But the avid marathon swimmer will be land-locked for a while during his new assignment. “It is very unlikely that I will find suitable open water in Afghanistan and even more unlikely that our security people would allow me to swim in it. In fact, it will be a real challenge to find even one suitable and accessible pool to train in.”

Despite his current assignment, the Dutch dynamo will undoubtedly find his way back to another channel before too long.