Channeling Dolphins In The Oceans 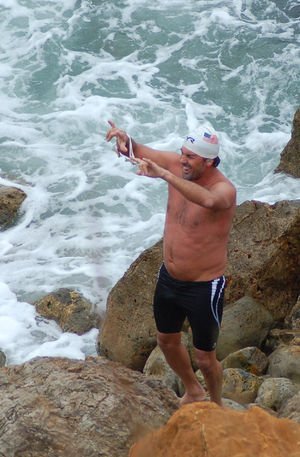 When most open water swimmers see or hear dolphins in the ocean, they smile and look around for the friendliest mammals in the water. Like mermaids among sailors in the seafaring centuries of yore, dolphins are welcomed interlopers of the ocean swims.

But Hank Wise, an 8-hour Catalina Channel swimmer, takes interaction with dolphins to an even deeper and more profound level. He explains, “At the end of my Catalina Channel swim, there were two smallish blue sharks cruising behind the boat about 100 meters behind me. It was no big deal. My crew saw them and I kept swimming along…”

His crew, including his older brother at the helm of the escort boat, and two local lifeguard friends on paddle boards pulled in closely to the Stanford graduate. Like bodyguards around a president, Matthew Mitchell and Jon McMullen, went on hyper-alert. They communicated with murmurs and glances, each ready to protect their buddy if the situation turned pear-shaped.

But Wise was focused on a fast finish and was protected by his strong belief in a harmonious relationship with all around him. “I approached the swim by channeling the spirit of the dolphin.” With every fiber in his body he truly emotionally and psychologically melds into the aquatic environment. His crew could literally see Wise smiling and enjoying himself on every stroke. He was swimming fast and pushing himself, but you could sense he didn’t want the experience to end. And his advice is typical of his personal philosophy when entering the world’s ocean, “Be a dolphin. Transmit dolphin energy.”

With that mindset, the Long Beach, California-born and -bred swimmer figuratively and literally swims with a mental force field of protection around him, savoring every moment in the ocean and appreciating the experience of every stroke.