Charlotte Samuels On The Bight Side 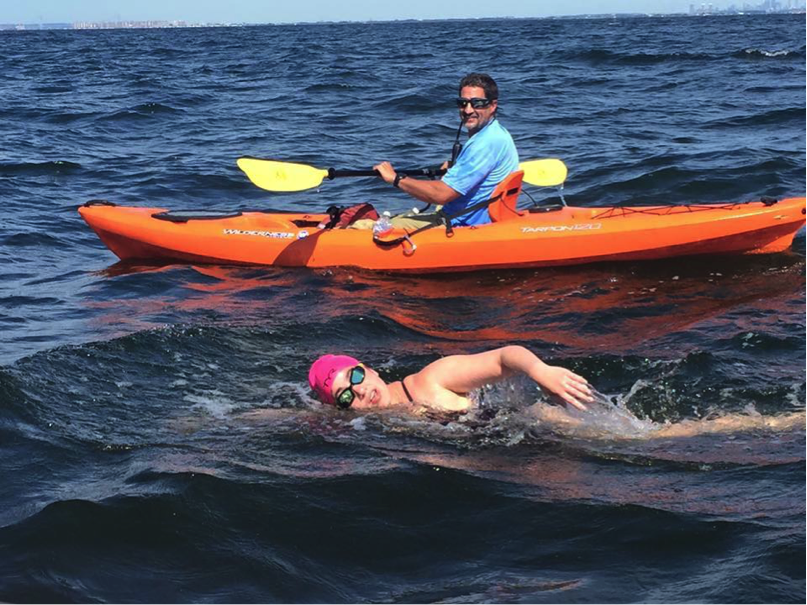 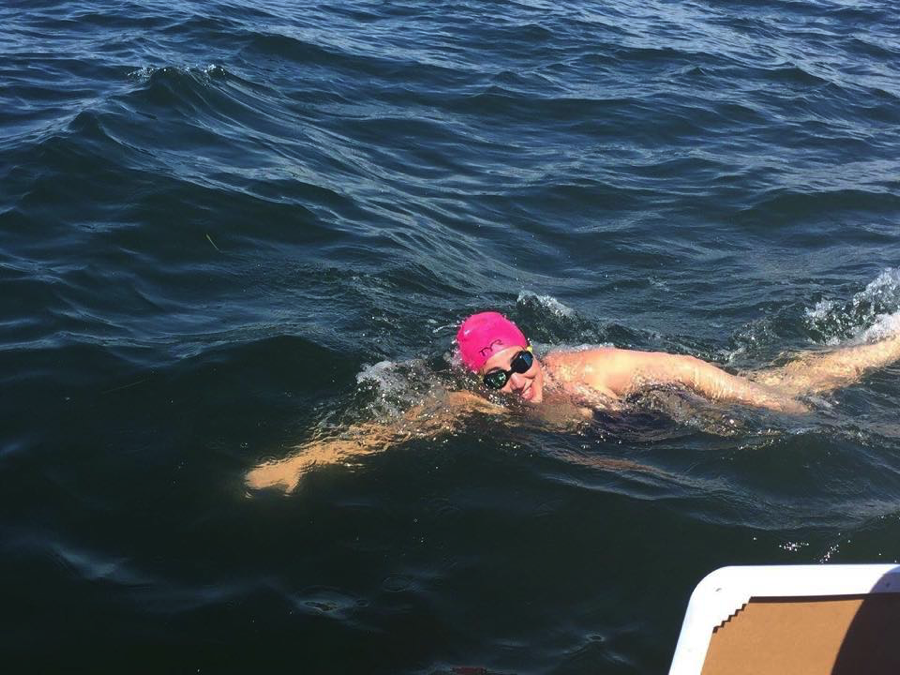 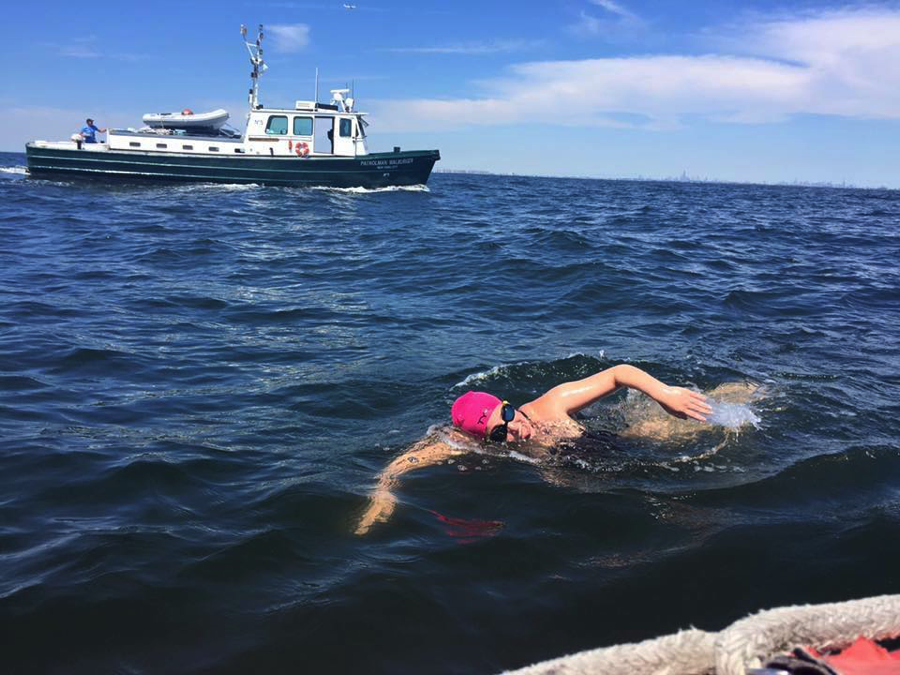 Uncrossed by channel swimmers until now, this particular part of the Atlantic Ocean starts on Long Island’s Atlantic Beach in New York and stretches across Sea Bright in New Jersey along the famous Jersey Shore.

The youngest to achieve the Triple Crown of Open Water Swimming, the 16-year-old Charlotte Samuels talked about her 9 hour 44 minute swim with Mackenzie Miller.

Daily News of Open Water Swimming: So first off, how does it feel to become to first person to ever attempt this swim, and finish it?
Charlotte Samuels: I am completely overwhelmed in the best way. I am so grateful for the opportunity that I had to attempt this crossing. With every new swim like this comes uncharted territory and different conditions that have not been recorded before. My race directors were extremely helpful in terms of the logistics and the navigation. At one point in the beginning of the swim, the boat began to drift when the engine was turned off and it turns out it was moving in the direction of NJ! I also had such an incredible team of boat captains and support crew including my dad, my uncle, one of my best friends, and my coach/strength trainer. I am elated and proud of all of the different pieces that went into making this swim a success.

Daily News of Open Water Swimming: Who introduced this channel swim to you?
Charlotte Samuels: My friends Rondi Davies and David Barra were looking to put together a swim that would be of equivalent conditions to the English Channel. Earlier in the year, Dave introduced this swim to me when I reached out to him ideas of possible new swims. The idea of doing something new so close to home was very appealing to me.

Daily News of Open Water Swimming: How did you feel about attempting a channel swim that has never been done before?
Charlotte Samuels: I was so thrilled and so interested to hear that a swim like this was right in my New Jersey backyard. I had never heard the term the ‘New York Bight‘ before and I looked at lots of maps and pictures to familiarize myself. I also learned about the wildlife and the influx of animals to this nursery-like area. I am hoping that my swim will be used as reference for more swimmers who wish to attempt other swims in this beautiful body of water. Most of all, I hope my swim will provide an outline of an English-Channel like experience here on the East Coast.

Daily News of Open Water Swimming: Did you do anything different in terms of preparation for this swim as oppose to your other crossings in the past?
Charlotte Samuels: This was my first and only marathon swim of the summer, which was really different than having three high-intensity and high stress swims condensed into one summer like last year. I went to a poetry slam camp at Gustavus Adolphus College in Minnesota and I went to a two-week long writing program at Smith College. I know that swimming is a big part of what I love, but I am so grateful to have had these other opportunities with other activities that I love, as well. In terms of how I trained for the NY Bight Swim, I’ve been working with a strength coach to get stronger and I’ve been also training at higher intensities to maintain a faster speed over the extent of the swim.

Daily News of Open Water Swimming: I noticed on Facebook that your friend took over your page with updates as well as writing messages and words of encouragement on a white board. How was it having a friend do that for you?
Charlotte Samuels: Something that is very important to me in my swimming is that I am surrounded by positive people. I consider the positive vibe to be very important to the success of the swim. I found myself to be mentally at a much more peaceful place in this swim than in some of my other swims. I felt very safe and very calm and it was a really nice extra boost to be able to look up at the smiling faces of the people I love. I am grateful for the supportive messages I received during this swim. I think that in a lot of the pictures I am smiling and I remember just being so happy.

Daily News of Open Water Swimming: Would you recommend this swim to others? If so, what swimmers would you recommend it to? New York/New Jersey swimmers or any open ocean channel swimmers?
Charlotte Samuels: I would absolutely recommend this swim to any open water swimmer who is looking for a challenge here on the East Coast. I think that the English Channel is one that many consider to be the all/end all of marathon swimming, and I don’t believe that it is. There is such an extensive community of open water swimmers here in the NY/NJ area and I think this could ultimately appeal to a wide variety of them as a local marathon swim. This swim was 21 miles (similar to the Catalina Channel and the English Channel swim) and it had some of the similar challenges. We have this ocean right here and we really have the opportunity to take advantage of it through swims like this. I have already been receiving messages asking for logistics/planning of the 21-mile NY Bight swim because other swimmers are hoping to attempt it.

Daily News of Open Water Swimming: How would you compare this to your swims you accomplished last summer? Did you like it more or just the same?
Charlotte Samuels: I think this swim is hard to compare to my three marathon swims from last summer. It kind of feels like a dream, looking back, and each swim has a different feeling associated with it, to me.

The Manhattan Island Marathon Swim was a swim that I was unsuccessful doing in 2013, so coming back strong in 2014 was very important to me. I was able to swim in the company of extraordinary people from all over the world who had the same goals and love that I did.

The Catalina Channel was a swim I was very confident going into, but was surprising once I left Catalina Island at midnight. I experienced hallucinations and I was not swimming very well which left me with many miles to cover in the daylight. I reached my breaking point in the swim over and over again and somehow managed to pull whatever was inside of me to get to California. A swim that I thought would take 12-14 hours took over 20 and I was left with a new humility and respect for the ocean, which I would need later in the Channel.

The English Channel feels the most like a dream to me. With no secured spot on a tide or on a waitlist, we boarded a plane to England. I swam two weeks later beginning at sunset on a Spring Tide. I needed every ounce of support and love to push me through what I faced in the Channel and inside of my own mind. When I touched France almost 21 hours later, I realized how lucky I truly was and how great of an opportunity I had been given that how somehow everything had come together. This swim will always be associated with a sort of dream, as I have still not come to fully understand it.

When I left Atlantic Beach at 7 am on August 22nd, I immediately was overcome with a different feeling as I looked out over the great big blue, headed to a new land, not sure what the stretch would hold for me. When I began to swim, it was very choppy and I knew that this could be a mental obstacle if I did not calm myself down. I then realized that the chop was pushing me to New Jersey and I was no longer scared. I tried to ride each swell and I felt as if the ocean were holding me in a way I had only ever experienced during the night of my English Channel. I had flashbacks to moments in the other swims and the love I received all of which were driving forces for me. Looking up at the zodiac and the kayak and seeing the smiles and whiteboard messages reminded me of how lucky I was to be under the sun, in the blue, doing exactly what I loved more than anything. I pushed myself physically harder in this swim that I ever have and I was so surprised when the time was hours and hours before anything we predicted. I was reminded of the kid I used to be, looking for something greater than competition of swimming, only to find the greatness of the ocean right in my backyard. For me, this swim will always be associated with love and home and I don’t think I could ever want a swim to be anything else.

Daily News of Open Water Swimming: What channel would you have to say is your favorite so far?
Charlotte Samuels: I think that this swim will always have a magical and special place in my heart. I love all of the swims in very different ways. The excitement of being able to experience a marathon swim at a place that felt so incredibly vast, yet so close to home, is something that I don’t think will ever be topped for me. These were the waters where I learned that open water swimming was my passion and true love. The swim was very nostalgic as I recollected memories from years before when I realized I felt most at home here. I will always think of love when I remember this swim.

Daily News of Open Water Swimming: Do you have any other channel swims planned for the near future?
Charlotte Samuels: There are many swims that I want to attempt in the future, but for now I’m focusing on being a high school senior and everything that comes with that. I really hope to swim in college and maybe work with a college coach/college team to experience marathon swimming in even more ways. I am also focusing on my club team swimming and teaching inner-city kids how to swim at the local pool in the remaining days of summer.

Upper photo shows David Barra kayaking, one of the swimmers who introduced Samuels to the idea of swimming the New York Bight.