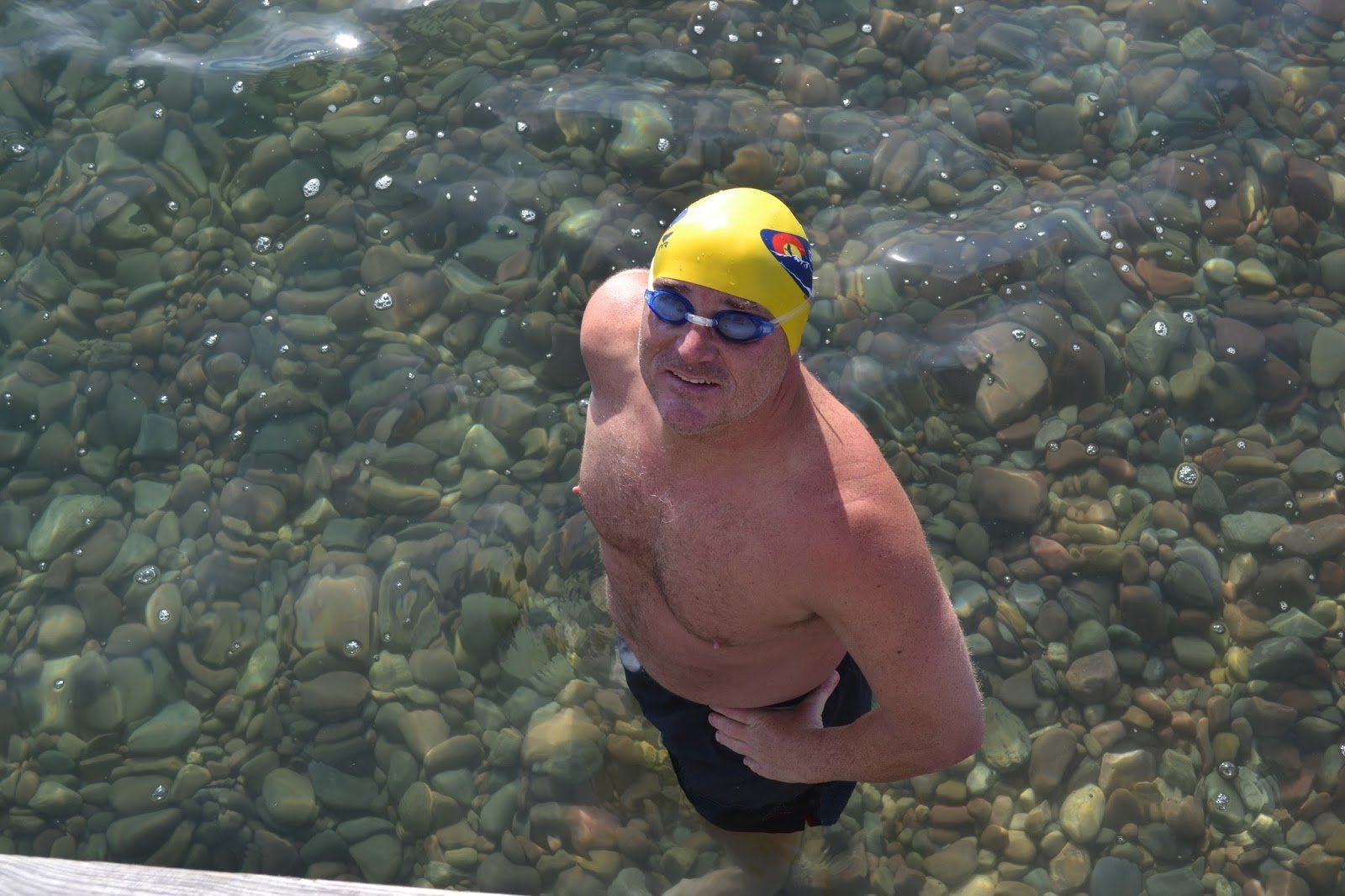 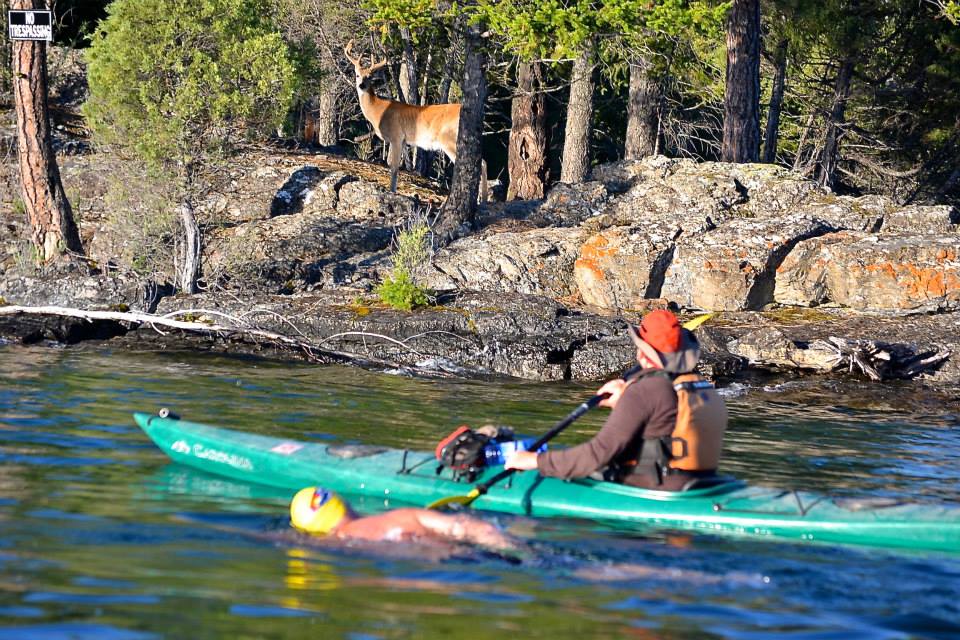 Courtesy of Mark Johnston, a swimmer follows in some big paw prints across Flathead Lake, Montana.

Over Labor Day weekend in 2010, a four-year-old female grizzly bear swam a remarkable 15 miles across Flathead Lake in northwest Montana.

Although known to be capable swimmers, grizzly bears don’t often come across lakes as large as Flathead in their territory. At 28 miles long and 15 miles wide, Flathead Lake is the largest, natural, freshwater lake west of the Mississippi River. Fed by waters flowing directly from Glacier National Park, Flathead Lake is remarkably clean, deep (360 feet), and consistently cold. In July, the water temperature peaks at about 72ºF, but by early September, fall’s chill has already begun to set in.

Montana Fish, Wildlife & Park workers captured and collared the bear in June 2010 because she was too close to an active camp on the lake’s western shore. They released her in a remote area approximately five miles west of the lake, presumably far enough away from people to keep her and them safe. However, within two months, she had returned to the lake near the town of Rollins. Undeterred by the size and chill of the waterway that stood between her and where she wanted to go, the wily bear braved the crossing.

Starting at Painted Rock, the bear swam one mile south to Cedar Island, where she spent the night. The next day, she continued swimming southwest to Wild Horse Island where she roamed for three days. On day five, she landed at King’s Point, north of Polson, another six miles away. She rested again and set out across the body of the lake, completing an eight-mile swim to the east shore.

Her amazing journey was discovered when the Montana Fish, Wildlife & Parks team retrieved the GPS-enabled collar they had fitted her with more than a year earlier and analyzed its recorded data. They learned that between June 2010 and September 2011, the roaming grizzly had travelled approximately 1,200 miles in total, which included her astonishing 15-mile swim of Flathead Lake.

“She spent a minimum of eight hours in the water swimming (during the last section), probably closer to 12 hours if you put it all together,” says Rick Mace, a research biologist with the Montana Fish, Wildlife & Parks.

“I was fascinated by this story, and being an open water swimmer who loves Flathead Lake, I decided to retrace that intrepid grizzly’s voyage across the lake,” said Mark Johnston. “On the fourth anniversary of her swim, I set out in optimal conditions from Painted Rock on the western shore. With the help of my support crew, I was set to chase the grizzly.” 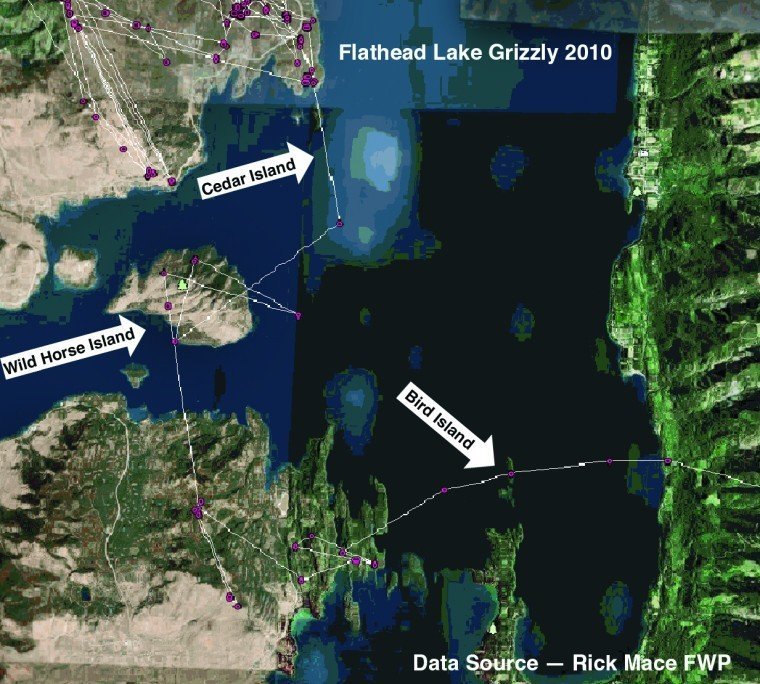 The water was a comfortable 65ºF and the 75ºF air made for a surprisingly pleasant start to the swim. “I expected the swim to take 7.5 hours,” recalls Johnston.

  “I started at just past 8 a.m., thinking to myself, ‘I only have seven-and-a-half hours left.’ I’ve always considered myself a sprinter; I hate long distance pool swimming but open water swimming is a different story. Because this was a point-to-point crossing, I wouldn’t have to do laps, making it easier to focus on my goal of getting to the other side.

A kayaker guided and protected me from boat traffic and my crew — enjoying bagels and freshly brewed coffee — rode along in an 18-foot motorboat. I envied their breakfast, as I would be eating little more than Montana huckleberry-flavored energy gels and water every 45 minutes for the next eight hours.

I soon settled into my All Day Pace, which I’d developed while training for an English Channel relay a few years ago. I took 50 strokes per minute as I headed toward the first island the grizzly had visited in 2010: Cedar Island. This leg of the swim took only about 30 minutes, and I was right on pace — seven hours left, or 14 times what I’d just completed. Wait, did I just turn that into laps? As I swam toward my next destination, I wondered whether the grizzly bear had a goal when she was swimming and whether she’d worried about her pacing during her adventure.

I stopped near Shelter Island for a feed after an hour. That’s when conditions started to get more difficult. I no longer benefited from a tailwind pushing me straight south — the wind had shifted some 20º to the west. Keeping a steady swimming rhythm is difficult when the wind and waves come in at odd angles, and my support kayaker also found it difficult to stay close to me. At times, I wasn’t sure where he was guiding me, but I let him lead the way.

And soon, we arrived at our next checkpoint, Wild Horse Island State Park. Wild Horse Island has been an important historical landmark for generations; half of Flathead Lake and the entire path of the grizzly’s crossing lies within the boundaries of the Flathead Reservation, inhabited by the Salish-Kootenai Indians. They had long used Wild Horse Island to pasture their horses and keep them out of the thieving hands of rival tribes. Trails and paths crisscross the island and hikers often report seeing wild horses, big horn sheep, goats, deer, and the occasional grizzly bear. Back in 2010, the grizzly I was chasing had spent three days on the island, possibly hunting the various animals that call the island home.

About five miles into the swim, my training partner Erika Binger arrived to swim the mile and a half with me to Rocky Point. I was glad to have the company. We headed south in tandem — Erica in a wetsuit, me without They’re against my open water religion. About an hour later, we arrived at Rocky Point where the bear’s path switched from southerly to easterly toward Bird Island. Though it still lay five miles to the east, I could see it. The wind died down and the lake flattened into a glassy pool, flat as a tabletop, with visibility in all directions seemingly infinite.

I’d passed the halfway point but still felt strong, with only the occasional twinge in my shoulder. My feedings were going well and I started thinking about a post- swim beer, still seven miles away, but coming closer with each stroke. I cruised to Bird Island in the flat water, enjoying the spectacular September day and started wondering what the grizzly had thought about four years earlier. The data don’t show the time she swam or what the weather conditions were, but I’m pretty sure the bear and I were probably thinking the same thing: I want to get to that island.

We arrived at Bird Island, 12 miles into the swim, and from there I could see the entire course including the finish at East Shore a mere three miles away. It looked so close, so I thought, ‘Why not pick up the pace?’

That was probably a mistake; after 7 hours of swimming, I was more tired than I realized and the wind and waves picked up again, making that last segment more difficult. I was off pace and had to slow down, but after 8 hours and 45 minutes of swimming, we arrived at East Shore, just below Highway 35. Some cars honked at us as we got closer, and we wondered if they knew what we’d accomplished. Did anyone honk at the grizzly in 2010?

Back in the support boat and motoring toward home, Captain Greg and my wife Dana greeted me with congratulatory hugs and Montana’s finest micro-brew beer, Cold Smoke. I couldn’t thank them enough for their support and encouragement. As hard as it was to swim 15 miles, it can’t be very interesting to observe someone swim 15 miles.

Reflecting on what I’d just accomplished, I thought about that grizzly and what she might be doing right then. Grizzly bears enjoy a long life; a female’s average life expectancy is 26 years with some living for 40 years, so, it’s likely that the aquatic trailblazer still roams the Mission Mountains between Flathead and Swan Lakes. I wonder if she still swims or cares to swim anymore. Since she dropped the GPS collar, we probably can’t find out where she is, but perhaps someday researchers will locate her through an implanted microchip and we’ll learn more. In the meantime, I’ll keep chasing her across Flathead Lake every Labor Day. 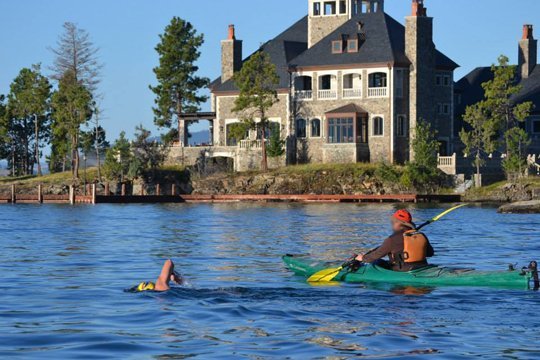 Inspired to Chase the Grizzly?

“I’m planning my next Chasing the Grizzly adventure for Labor Day 2015 and I hope to share this experience with the open water swimming community. If you’re interested in tracing the bear’s course and learning more about the area, please contact me: Coach@FlowSwimmers.com (Flathead Lake Open Water Swimmers).

Please also consider donating to the Flathead Lakers (www.flatheadlakers.org), a 1500-member non-profit organization whose mission is to protect the quality of the Flathead watershed.
“