Cheers To Jonathan Ratcliffe, Warrior Of The Waves

Cheers To Jonathan Ratcliffe, Warrior Of The Waves

It has been a little over a year since Jonathan Ratcliffe achieved the Oceans Seven, a year in which he was well-deservedly nominated for the 2019 World Open Water Swimming Man of the Year. With five children, ages between 10 and 25, each of them crewed individually alongside his wife on different channel swims, making the Oceans Seven truly a family affair.

Ratcliffe recalled, “It was a total team family effort with Julia crewing all Oceans Seven swims and other members as young as 10 accompanying in tough weather crossings.”

With the help of Matt Wild earlier this year, Ratcliffe had something to continue to share in celebration of his achievement. Matt Wild of BrewBabu in Oundle, Peterborough, UK created Wave Warrior, a pale ale in honor of Ratcliffe’s Oceans Seven achievement. The label reads:

Warrior of the Waves!

On 10 December 2019 Jon Ratcliffe completed the final swim of The Oceans Seven Challenge. He is one of only 19 humans in history to have crossed the English, Irish, Molokai (Hawaii), Tsugaru (Japan), Catalina (California) channels, the Strait of Gibraltar, and the Cook Strait (New Zealand).

Jon swims to raise awareness and money for CROPS, a charity providing mentors in schools to transform the lives of 100s of young people each year in Peterborough, UK.

This beer was brewed in honour of Jon’s exceptional achievement. Pale malts showcase the citrusy, orange-marmalade, and spicy qualities of the ‘First Gold’ hops.

Ratcliffe said, “Not everyday finishes with a late night return from work to find local legend and master brewer Matt Wild waiting with a delivery of his limited edition Pale Ale to commemorate our charity swims. Such an awesome gesture.” 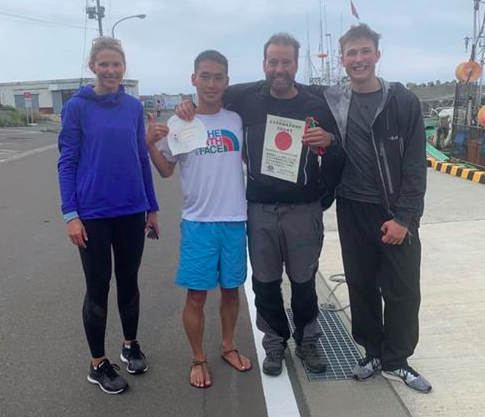 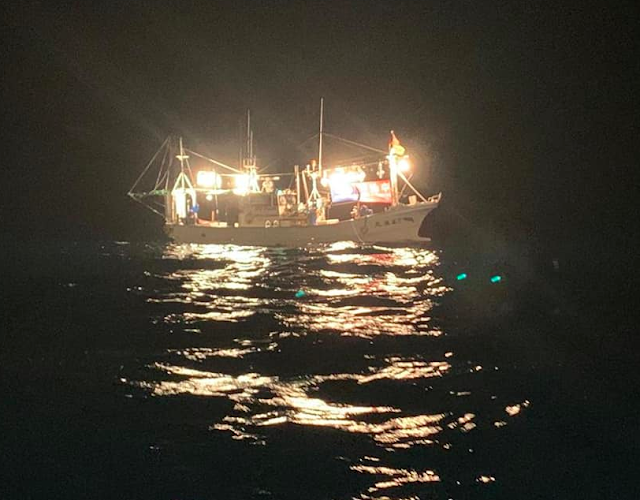 The 45-year-old British swimmer recalled the night crossing of his 11 hour 7 minute crossing of the Tsugaru Channel from Honshu to Hokkaido in northern Japan, “It was pretty plain sailing until the last 1200 meters which took us over 2 hours to cover. I don’t think I have ever swum the last 700 meters of a channel from so many different directions trying to find a way past the changing currents.”

Ratcliffe also described his 42 km Molokai Channel crossing between the islands of Molokai and Oahu in Hawaii which required another night crossing, “The Kaiwi Channel in Hawaii is accessed by most via light aircraft (one of the more relaxed check-in’s I have every experienced) with flights leaving on Hawaii time, which is frankly whenever the Captain feels ready.

Flying from our hotel base in Oahu, we were picked up from the airport at our destination Island of Molokai by two lovely ladies and their respective children (one of the only taxis that work the island) which made the ride for Julia, myself and Sam a touch cosy for the 40-minute cab transit to the deserted beach of Papohaku on the west side of Molokai. Ceremoniously dumped with our belongings now stuffed into a drybag, skipper Mike Twigg-Smith and his crew welcomed us aboard his boat which, being moored in the bay, required all to swim out to.

Final prep, lanolin and vaseline applied wherever you think you might chaff (application protocol demands enlisting a helper to assist normally with the use of disposable rubber gloves but no one is ever keen to volunteer for the job), it was time to start. Swimming back to shore for a serene start amidst coconut trees and warm offshore breeze, I couldn’t have hoped for a better setting (sorry Ireland and France).

Boat anchor up, kayaker in the water and I was signalled to start.

It was great to be in the sea, feeding on the hour every hour, nerves finally disappeared, just time to get on with the task. It’s a windy old channel and when the deep water comes it can be choppy. 3 hours in and I was suffering from sea sickness, which might seem strange when you are immersed in the deep dark blue but, trust me, is imminently possible with rolling swell and no apparent horizon. My first few feeds had been a little hit and miss; they always are, as swimmer and crew get used to the regime of tossing bottles, handing bananas and generally shouting at each other incoherently over wind and tide. Julia and Sam were doing a fab job, I could see it was no fun for them. Little heads popping up over the side of the boat at feed intervals, trying to balance grimace and smile. I was so glad I was not on that boat.

Kayakers rotated every 90 minutes – 3 on the boat which sets a course on the plumbline for Sandy Beach in Oahu and sails approximately 300 meter ahead of swimmer.

4.5 hours in now and I really had had enough. It wasn’t though I was physically finished. In truth, I just couldn’t be bothered. I am really unsure what it was, jetlag, laziness, sea sickness. I just wasn’t in the zone. Breathing only on my left as surf and tradewinds mean the swimmer is always pushed a little too far south and battles back into position by swimming angled off to the north. I was bored of feeling rancid and so didn’t need another 10 hours of this. Stung again, that’s it I thought. Time to tap out.

The boat was called back. I half heartedly told Julia I had had enough and in true camp Ratcliffe style, I was refused entry back onboard -although I shall always remember Sam told me it was OK if I quit – I think he thought it would mean a quicker return to harbour for him too.

That’s really when my swim began. I got hold of myself a little, using the outline of the kayak next to me as an artificial horizon which was now conveniently lit up by the kayaker’s head torch red light. Slowly 15 minutes became an hour, which became two, which became midnight.

My sea sickness eased and the regular man o’ war jellyfish stings were eventually a source of sporadic adrenaline boosts as ones body reacts to the venom “pick me ups”. Interesting alternative to caffeine tabs. The escort crew were fab, silent when they needed to be, encouraging when not silent. Annoying little things became amusing. Although being passed an empty feed bottle at one stage wasn’t met with much humour at my end and a few choice words were exchanged. I think the “feeders” planned to get their own back and at the next scheduled tread water stop some sea sickness pills I had asked for were tossed in an “almost” closed bottle, swallowed in one, I realized only too late they had been diluted in sea water which quite effectively has the opposite effect on ones gut I had hoped for. The boat crew are always concerned when a swimmer is sick. Sharks have an inquisitive sense of smell. I was blissfully unaware, burping and barfing my way through the night.

There is always one point on a swim you remember more than most. Mine was a 2 am Snickers, I enjoyed on my back, goggles off, just staring at the stars. It was at that point I remembered I was here because I wanted to be. It was my choice, my journey. Sam from the boat, me on my back, saw the same shooting star. Smiling now, I paddled onwards.

Dawn comes late in Hawaii. The sun doesn’t rise until 6 am. What’s that all about. By then, I was 5 km from the end. The bringing of a new day always lifts spirits and I fought away the ever present fear I was being pushed too far south by the rising tide. It was a hard old slog to make up the ground back to the plumbline and I swam on for a few hours with Makapu’u lighthouse on the Oahu shore never really seeming to get any closer. The kayakers were perfectly polite in avoiding any concrete answers to my barrage of questions one is never meant to ask when swimming channels like “how long to go?” and “are we nearly there yet?”

Strangely, I knew the end had come when I saw the bottom for the first time. Sand and rock moving beneath me. Slow progress, water depth getting shallower. I glanced up and could see the kids who had come out to meet me on the distant cliff’s. That was an incentive to speed up.

The captain Mike likes to join the swimmer for the last 200 meters or so into shore and as we swam through the breakers I was quietly glad he was there with fins to guide me in. The final few meters of the swim are always a scramble as you claw on sand and seashell to shore, wondering if the knees and legs will work to allow a graceful stride onto the beach. They never do.

I learnt a bit about myself in this swim, but more about others. It was a treat to be with the locals and to have been skippered, escorted and crewed by fantastic family and friends. It was certainly a week not to be forgotten for the kids who made ample use of the natural surroundings as I spent the week replenishing calories.”

CROPS Mentoring in Schools (Christian Options in Peterborough Schools) is the charitable trust that Ratcliffe swam for. He asks, “If you have time, please read about the work we are trying to do in our local schools with the incredible volunteers and staff that are a true inspiration.”