Chelsea Nauta Is A Bulldog At The Tampa Bay Marathon Swim 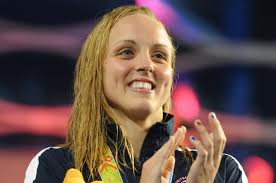 It was quite an introduction to marathon swimming for Olympian Brooke Bennett. But the champion that she is, Bennett was one of the few finishers in the field of 18 who started and finished despite punishing waves and stiff winds at the 24-mile Tampa Bay Marathon Swim held this weekend.

But it was former University of Georgia Bulldog swimmer Chelsea Nauta who swam faster than all the men and women who was able to fight through swells and a strong headwind at the 16th annual event in Tampa, Florida.

Nauta, a three-time Florida High School Swimmer of the Year and USA National Team member, was able to finish the swim in 10 hours 7 minutes to hold off Olympian Brooke Bennett who finished 4 minutes later.

Behind the leading men was the men’s winner Chris Burke of St. Petersburg, Florida in 12 hours 16 minutes. He was able to out-duel his friend and training partner Dr. Mark Smitherman of Clearwater who finished in 12 hours 33 minutes. One relay team of six swimmers, NC State of Mind, posted a slightly faster time than the fast-moving Nauta in 10:02.

Starting at the Sunshine Skyway Bridge and ending on the Courtney Campbell Causeway in Tampa, the race was held on Saturday, April 20th in celebration of Earth Day and the revitalization of Florida’s largest estuary.

The results are as follows:

Since the Tampa Bay Marathon Swim was first staged in 1998, it has drawn competitors from across the United States, Great Britain, Guatemala, Italy, Australia, Japan, Argentina, Dominican Republic, Germany, India, Canada, and the Cayman Islands. It is made possible because of efforts of founder Ron Collins and the conservation efforts of people like the Earth Day Network.