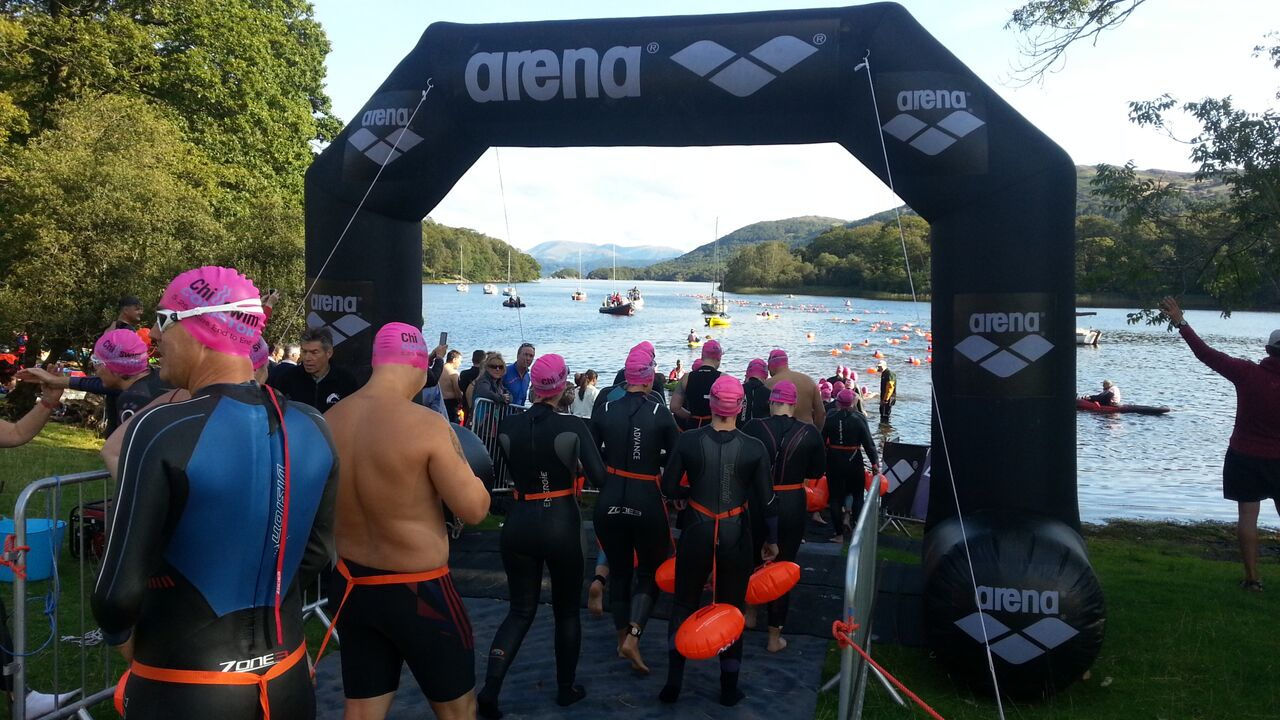 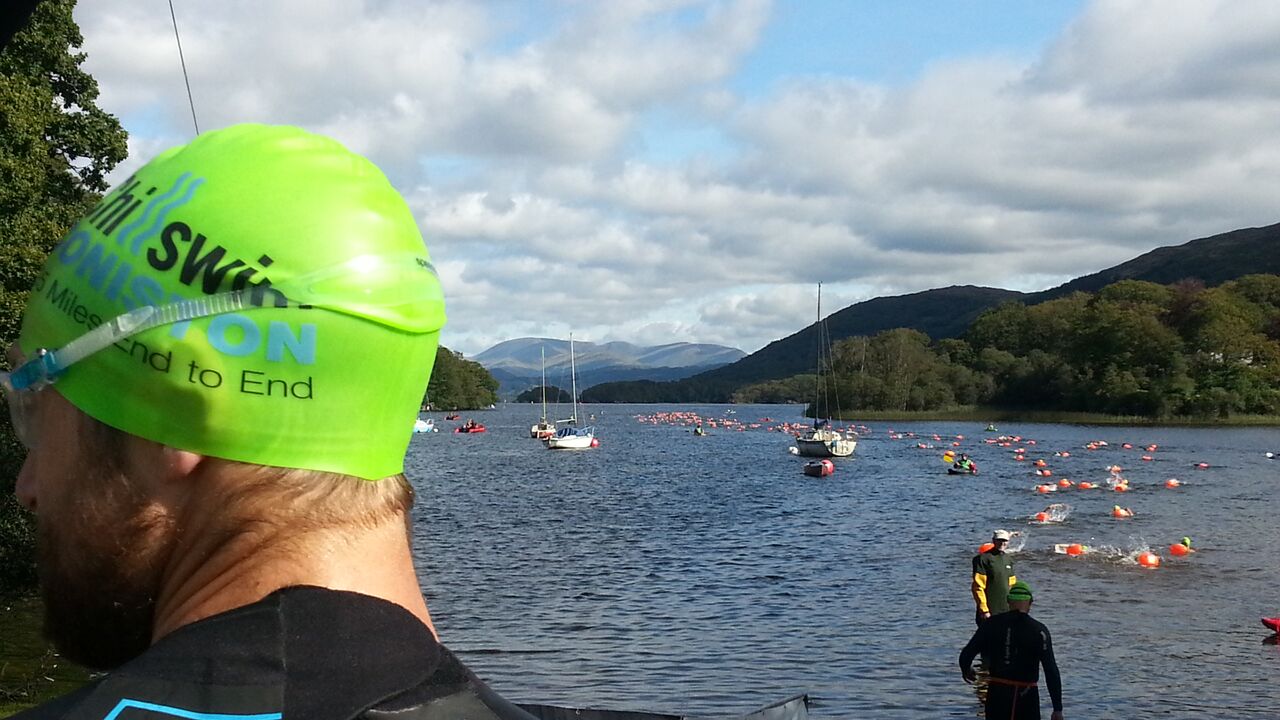 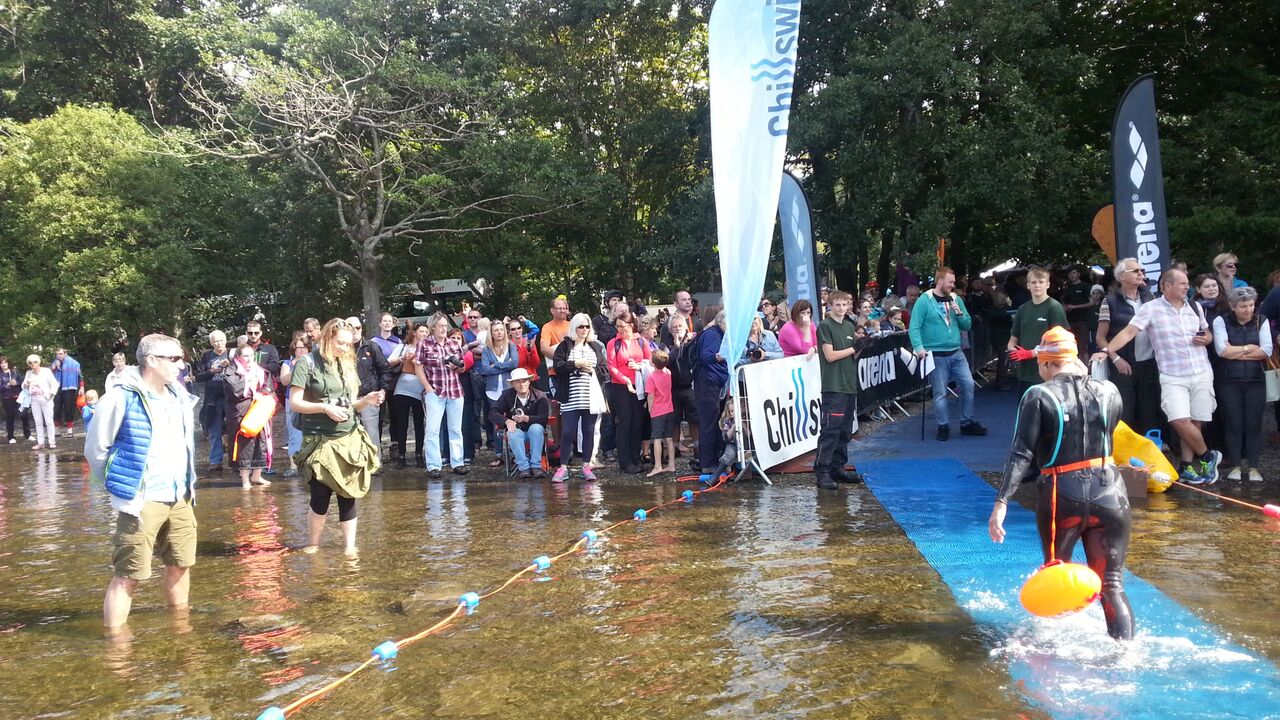 A beautiful day in the Lake District greeted swimmers from as far afield as Singapore, Jersey, and the far north of Scotland as well as a host of Cumbrians in the Lake District National Park’s Coniston Water on September 5th for the third edition of Chillswim Coniston.

With 750 entries, the course of Chillswim Coniston was the entire 5.25 mile length of the lake from Low Water End to Monk Coniston and is the largest mass participation length of lake swim in the UK. Swimmers were split into six start times based on their predicted speed and each entry included a Swim Secure tow-float, which were a mandatory swimming accessory.

Tow-floats attach via a leash and waist band to swimmers in order to increase their visibility in the open water and are also sufficiently buoyant for tired swimmers to hold on to at feed stations.

Mile markers were positioned throughout the course as well as four feed station boats positioned at set points offering drinks, energy gels, jelly babies and bananas as sustenance. The water temperature averaged 17°C on Saturday. Both wetsuit and non-wetsuit swimmers took part in the swim where finish times ranged from 2 – 7 hours.

For many swimmers, Chillswim Coniston was their first long linear swim, rather than around a series of buoys in a circle. This was about completing the challenge. Participants included local graphic designer Petra Blahova from Kendal-based design and communication specialists Lavahouse. Blahova, a non-wetsuit swimmer, had been training for the event with post-work training swims in Windermere, “This was my biggest swim challenge, after taking part in the Cross Lake Swim with Chillswim in June. What a fantastic event. Thanks so much to the Chillswim team and the water safety team on the lake. The support was amazing. I’m absolutely shattered but feel so alive after completing the whole length of Coniston Water. I’ll be back next year.”

Several swimmers used the event as an opportunity to raise funds for charities, including 41 swimmers for Chillswim’s partner charity, FRANK Water who have so far raised £6,500. Philippa Cox, of FRANK Water, said “What an amazing weekend and another highly successful Coniston Chillswim. The feedback that we heard from the swimmers was so positive and I think that is testament to all the hard work that Chillswim put in making it a fun, but challenging event. A team of FRANK Water volunteers helped out as event crew and even went for a dip ourselves after the event which made us all realise what a challenge it is – 17°C still gave us face freeze.”

Swimmers were able to participate in either wetsuits or without, as Chillswim recognizes these as distinct categories, due to the technological advantages neoprene has over simple bioprene. Top three swimmers in both categories:

Wetsuit (women)
1 Sophie Casson 2:00:20
2 Vanessa Holland 2:09:12
3 Lindsay Blezard 2:20:04
Colin Hill, the founder of Chillswim, said “As a company Chillswim is owned and operated by people with a long standing passion for open water swimming so to see so many people completing the length of the lake swim today was wonderful. A linear swim such as this, over a distance of 5.25 miles really is a challenge, whatever the swimmer’s ability, but the reward was evident at the finish when swimmers were beaming with joy and pride. We are delighted with the responses we have had from the event’s participants would like to sincerely thank all of those who took part in the event, as well as the support we received from our volunteers, staff and partners.”