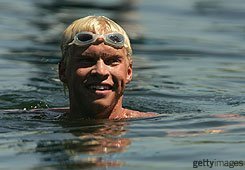 With over US$100,000 in cash and prizes, the world’s richest open water swim attracted 830 swimmers many of whom went home very happy with their randomly awarded prizes under a typically gorgeous day on Seven Mile Beach in the Grand Cayman Islands.

“The Flowers Sea Swim was amazing,” said visiting nurse Stacey Kelly from California. “The weather held and it was an unbelievable event with so many people sharing a great sport. It was intense for those who wanted that, but also low-key for the average person too. I am in awe of everyone who took part in putting it on and the Flowers Family for their extreme generosity. Unreal!”

The official results of the top 15 swimmers from the Flowers Sea Swim: