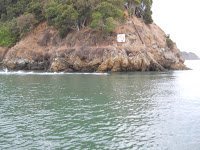 “I had a great start. I was right behind Ous [Mellouli, the 2008 Olympic gold medalist in 1500 freestyle],” said winner Chip Peterson. “It was a great position to be in.”

For the first 300 meters, Ous took off very fast and was pulling the world-class field along. Decisions had to be made because at that speed, no one was going to overcome Ous swimming right behind him.

Then, Chip used his open water swimming gut feel and decided to go left while Olympic medalists Thomas Lurz of Germany and Ryan Cochrane of Canada went slighty right – and Ous caught in the middle trying to assess the rapidly developing situation. The four different men choose different lines to the finish – each totally committed for a fast race over the sub-60°F (15.5°C) water in the middle of the San Francisco Bay.

Chip stuck to his line, Ous moved over and effectively took himself out of the race for the US$10,000 while Thomas and Ryan took their chances by swinging wide right. In a race across the tricky channel, it was Chip’s decision that was ultimately the right one.

Chip explains his strategy and the race in his own words:

Behind Chip, Thomas was in second, Ryan in third (shown swimming shoulder-to-shoulder with Thomas in mid-channel) and Ous fourth. Final results will be published later today.

Chip assessed his possibility of victory before the race here:

The top men’s results where five countries were represented in the top 5 overall in the elite division: