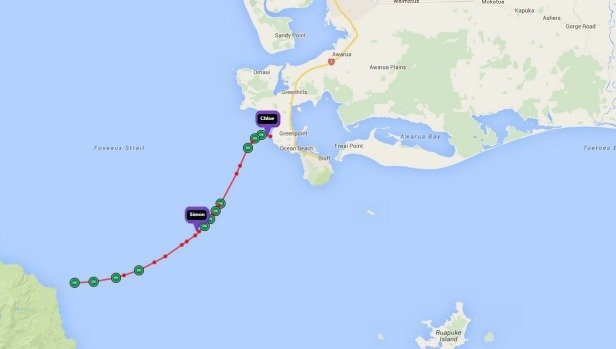 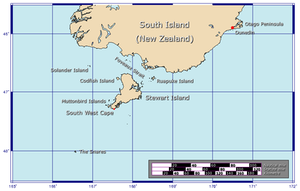 The strait is a rough and often treacherous stretch of water. Between the years 1998 and 2012, there were zero crossings, but a total of 23 fatalities in the Strait.

John van Leeuwen, a Dutch immigrant living in New Zealand, made the first successful crossing of the Foveaux Strait on 7 February 1963 in 13 hours 40 minutes. He left the beach near Bluff at 9:15 am and reached Stewart Island at 10:55 pm.

Chloe Harris, a member of the North Beach Surf Club who recently won the 17.5 km race at the Epic Swim Festival in Lake Taupo, became the latest and fastest swimmer across the Foveaux Strait on Monday.

Her father Graham Harris reports, “Chloe was able to swim the Foveaux Strait on the first day of the ‘window’ she had. She had great conditions and [Peter Leask] a superb pilot [on his oyster boat] who helped her achieve the fantastic time of 8 hours 30 minutes and 5 seconds.

It was also great to have the Southland District Council Mayor Gary Tong make his way to the beach to witness the final stages of the swim
.”

Her brother Richard Harris and Thomas Grindell provided crew support during her crossing, but the catalyst of her crossing was the time she spent with Wayne Evans, the last swimmer to have swum across the Strait. Harris remembers her inspiration. “He was probably one of the hardest workers out there, hardest trainers. He was pretty much the person you wanted to emulate.”

Her time broke the former record set by Todd Utteridge in 1985.