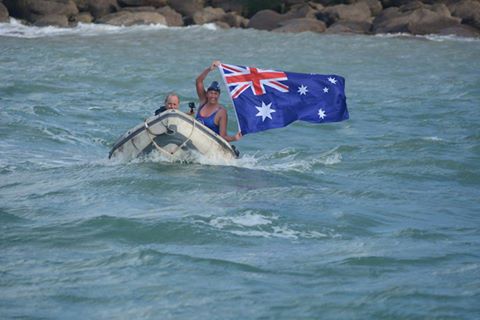 Like Renford who went 19-for-19 on his English Channel one-way crossings, but was pulled on the second lap of his two-way attempts, McCardel has had a similar 100% success rate on her initial one-way crossings. But as she has always pushed the envelope like her Australian predecessor, she was pulled occasionally for safety reasons due to hypothermia on a few multi-crossing attempts during her career. En route to her triple crossing last year, McCardel has always kept going and going – which is precisely that inner drive that has led her to completing her twentieth Channel crossing…with no slowing in sight.

With 13 crossings over the last 2 season, McCardel is on a roll like never and no one before.

“Go back 5 years and I suspect that NOBODY would have thought a swimmer would ever have a real shot at Alison Streeter‘s record of 43 crossings,” said Ned Denison of the International Marathon Swimming Hall of Fame. “Amazing both and Chloë is just getting started…“

“Chloë will almost most definitely have the most prolific career, post-induction, of any swimmer in the Hall of Fame history,” predicted Steven Munatones.

“It is quite possible that Chloë may take the Queen of the Channel® title before the age of 40. Even with a modest – for her – average number of 3 crossings per year during the rest of her 30’s, Chloë may complete the formerly unthinkable: break Alison’s career record in the English Channel.

What the legendary Alison did between 1982 and 2004 was undoubtedly pioneering and still mind-boggling, but Chloë’s streak of 20 crossings – and growing – is even more remarkable because she has to travel from Australia to Dover every summer. Her tenacity is beyond words..”

During Streeter‘s 22-year career and 43 successful solo crossings, the current Queen of the Channel® swam 903 cumulative miles in a stretch of water whose conditions she could never predict.

And – like McCardel – Streeter punctuated those Channel crossing with dozens of other channel swims and marathon swims around the world from Catalina Channel and Manhattan Island Marathon Swim to the North Channel and the Isle of Wight while working as a currency trader and raising money for a variety of causes.

Streeter and McCardel were both named as one of the World’s 50 Most Adventurous Open Water Women – and are utterly, undeniably, undoubtedly remarkable in every aspect.