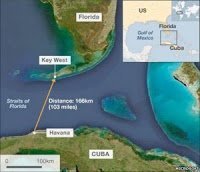 Chloë McCardel is rumored to have landed in Florida on her way to Cuba to attempt her swim from Cuba to Florida.

Here is one of her latest television interviews on her charity swim where she discusses financial support, sponsorship, sharks, and jellyfish.

But most impressive about her attempt is not the distance, crossing the Gulf Stream, or the possibility of sharks. Rather it is the possibility that the Australian marathon swimmer is willingly attempting the swim knowing she probably will encounter box jellyfish with only her bathers, cap and goggles.

That is scary tough.

The box jellyfish live deep below the surface of the Caribbean Sea during the day because they are photophobic, but they rise to the surface as the sun sets and their food sources come up from the depths. In a research project conducted by marine biologists and other scientists from Woods Hole on Diana Nyad’s 2012 crossing, the vertical movement of the box jellyfish were monitored, photographed, and documented. As the sun went down, the extraordinarily venomous box jellyfish came up. We have been stung, and seen swimmers being stung, by various types of jellyfish from Oceania and Asia to North America and Europe, but nothing has frightened us more than the sting of a box jellyfish.

That is just plain dangerously scary.