Chloë McCardel Swims Through The Blackout 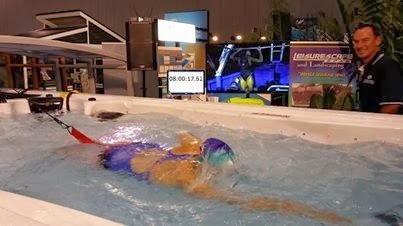 Chloë McCardel swam in a ‘swim-spa’ for 16 hours. Using high powered water jets as resistance, the young Australian swam in the swim-spa from midnight last night until 4 pm this afternoon at the SPASA Pool & Spa and Outdoor Living Expo at the Melbourne Exhibition Centre.

In a new experience, the 6-time English Channel swimmer had to swim through a power blackout at the venue during the early afternoon as she neared the finish.

McCardel said, “This would have to be one of the most unique endurance swims I have ever done. Rather than reaching a destination or trying to beat the clock, this was about swimming for the duration, and I’m so grateful for everyone who came along to have a look and support me as the hours ticked by.”

But there were differences that her long training swims in her native Australia or across the English Channel. “One of the really cool things about this swim is that there is no chlorine added to the spa. They use something called AquaSphere; there is no chlorine. I just got out and my hair is lovely and my skin feels great.”

McCardel adhered to the regulations set-down by the (English) Channel Swimming Association, although given the unique nature of setting this world-first record, certain regulations were modified to meet the conditions of indoor tank swimming. She was not allowed any intentional touching or standing on the bottom or sides of the spa, nor intentional touching of other people. She was allowed toilet breaks. “I’m so pleased to have been able to set this record in a fashion that shines a different light on the notion of endurance swimming. A few years ago I never would have imagined setting a record like this.”

Despite all the attention showered upon her, she was rather coy about one aspect. When asked about her next world-record attempt, McCardel hinted that it will be a major one, “You’ll have to wait for that announcement.”