Chloë McCardel vs The Box Jellies

Steven Munatones 10/23/2014 Open Water Swimming No Comment
Courtesy of 7News in the Bahamas.

The distance was incredible, 126 km, but the fact that Chloë McCardel could withstand several box jellyfish stings during her record-setting swim in the Bahamas and still continue swimming is unheard of in the open water swimming world.

To continue with that amount and type of venom in the human body is as unprecedented as was her swim itself.

See the effects on McCardel’s body in the 7News news report above where husband Paul McQueeney explains what his wife faced during her unprecedented 42 hour 30 minute swim. 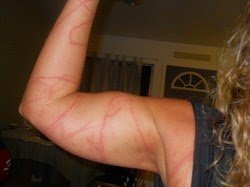 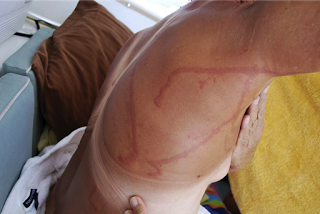 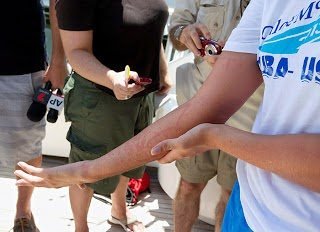 Angel Yanagihara, Ph.D. of the Asia Pacific Institute of Tropical Medicine and the University of Hawaii is considered the world’s foremost expert on box jellyfish. She presented a summary of her 18 years of research at the 2013 Global Open Water Swimming Conference and her provided her recommendations when ocean swimmers encounter the nearly invisible tiny animals.

“The box jellyfish or cubozoans have been identified in the Florida Straits and Carribean for over 100 years. The numbers of box jellies, appear to be increasing perhaps in part due to the loss of their natural predators, turtles, sun fish, pelagic fish, thus stacking the deck in favor of increasing jelly populations. Also, the microscopic stinging cells are present at up to 5,000 per centimeter of tentacle length or for a 18-inch tentacle 225,000 per tentacle. Far more than what was reported.”

Dr. Yanagihara explains the changes taking place, “Global climate change is not just a simple shift in temperatures, but a pivot point for species worldwide with a demonstrable risk of collapse of marine biodiversity. This is compounded by unsustainable overfishing and pollution of near shore areas. All these factors lead to a state where the ocean’s invertebrates can thrive again after millions of years of being subdued by top vertebrate predators.

I have watched schools of Hawaiian trigger fish devour local box jellies remaining in the reef during the day, but in other areas of the world when robust and voraciously feeding fishes are depleted by human activities (overfishing, pollutant-driven algal blooms with subsequent oxygen depletion), the jellies remain and proliferate
.”

This phenomena does not bode well for ocean swimmers like McCardel and others like Penny Palrey and Diana Nyad [both shown above] who challenge themselves to long swims in tropical waters.

When swimmers like McCardel are stung by box jellyfish, they encounter the painful punch from one of the world’s most venomous marine creatures. Dr. Yanigahara explains, “The response to the sting is not an allergic reaction. It is not at all like a bee sting. The venom of the box jelly contains ancient pore-forming proteins structurally similar to anthrolysin O and streptolysin O, the pore-forming toxins of anthrax and strep.

People are not allergic to these pathogenic bacteria either. Our blood cells are uniquely vulnerable to box jelly porins and to bacterial porins. There is no immunity or resistance – it is a question of the dose delivered.

Unfortunately, thinner skin areas of the body will allow a greater dose to be delivered. Women and children have thinner skin. So if an adult man is stung over thicker skin a smaller amount of venom will reach the blood stream than a sting of a child over a thinner skin region, such as face or neck

Some of the most persistently repeated treatments of jellyfish stings, and box jellies in particular, are with EPI pens. But Dr. Yanagihara who has carefully researched the chemistry of the jellyfish venom strongly advises against use of EPI pens. “EPI pens are absolutely contraindicated. I cannot stress this enough.“

She has conducted studies involving box jellyfish venom injection into piglets. The data shows that the venom itself causes a massive rise in plasma catecholamines. This is well reported in the clinical literature as a “catecholamine surge”. Adding an EPI injection on top of that situation is like adding fuel to a fire.

In fact, the losses of life that have occurred from box jellyfish stings have almost always involved well-intentioned EPI administration. Please be advised that the use of EPI pens is an extremely dangerous practice and yields no therapeutic benefit whatsoever.”

This is important information for ocean swimmers to understand. If they are stung by jellyfish and then they seek the advice of medical personnel who have very little practical experience in knowing what specific kind of jellyfish are responsible for the stings, they may receive the wrong or ineffective treatment.