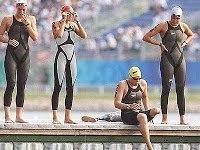 Simon Griffiths of H2Open Magazine penned a thoughtful and introspective article on Why our choice of words matters to our fellow swimmers (see here).

Griffiths explains in his article about how he reflected on the use of the term, disabled swimmer. “The preferred wording is ‘swimmer with a disability’ as this puts the importance on what the person does (i.e. a swimming) rather than the disability.”

He also wrote – sadly – that some athletes have trouble accessing clubs, venues and competitions. “Swimmers are told that their wheelchairs can’t be brought onto poolside, their walking sticks are a trip hazard, and that their health and safety cannot be guaranteed in the water when swimming with disability unaware swimmers.”

The situation – sadly – reminds us of the situation faced by the incredibly heroic Natalie du Toit of South Africa who was an amputee who qualified for the 2008 Olympic 10K Marathon Swim. Her efforts at the 2008 Olympics were recognized by the International Olympic Committee (IOC) as one of the best television images of the summer and winter Olympic Games.

The South African swimming heroine du Toit who received an honorary MBE (Member of the Most Excellent Order of the British Empire), was faced with an unusual situation right before the Olympic finals. Anna Rita Strydom recalls, “One of the officials did not allow Natalie to walk to the starting pontoon with her artificial leg. He said it was not allowed. Even Natalie’s competitors were shocked and they complained to allow Natalie to use her artificial leg. The distance was quite far and it would have been a significant disadvantage for Natalie to have to walk that distance with one leg.”

Fortunately, enough people complained and the official relented and was overruled. Despite the heated discussions that were held with the officials, what is not surprising is that du Toit was willing to walk out on one leg even if it would have created a disadvantage for her. The fact that her fellow competitors came to her side and thought the official’s decision was not right is a testament to the profound camaraderie shared by competitors who were all fighting for Olympic medals.

Eventually, the official backed down and allowed du Toit to use her artificial leg to walk out with the rest of the field where she represented herself, her sport and her country exceedingly well.

The shortsightedness of an official could have prevented one of the greatest performances of the 2008 Olympics for which du Toit was globally recognized.

Du Toit was presented with the MBE award by Prince Edward, His Royal Highness The Earl of Wessex at a ceremony in Pretoria, South Africa in 2013.

British Acting High Commissioner Martin Reynolds said, “Natalie has achieved great success in her sport, demonstrating an ability to compete with the best in both Olympic and Paralympic disciplines at numerous international sporting events. Natalie is an inspiration to up-and-coming athletes throughout the world and I am delighted she has been recognised for her achievements.”

Photo by Pei Qingsheng of Natalie du Toit preparing for the start of the Olympic 10K Marathon Swim at the 2008 Beijing Olympics with Keri-Anne Payne and Martina Grimaldi on the standing buoy with her.