Chris Green To Be Honoured On The RMS Queen Mary 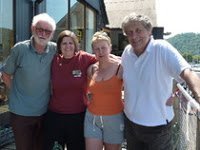 Chris Green will be formally inducted in the International Marathon Swimming Hall of Fame as an Honour Swimmer on the Queen Mary in Long Beach, California.

His illustrious career and selfless acts of volunteerism will be celebrated on September 22nd as part of the Global Open Water Swimming Conference. Over the course of his 4-decade career. Green has participated in marathon swims since 1969 as a competitor, administrator, innovator and pioneer.

Green has completed swims across all 16 lakes in the Lake District in 2000 and completed 74 crossings of Lake Coniston near where he lives. His perspective is fundamentally a marathoner: He doesn’t do yardage, he crosses lakes and if he’s feeling challenged he will do a double.