Courtesy of WOWSA, Huntington Beach, California. Christopher Guesdon, Chair of the International Marathon Swimming Hall of Fame, will be presented with the 2018 Poseidon Award. The Poseidon Award is presented annually by International Swimming Hall of Fame to the organization or individual for high level achievement from personal effort or initiative in a field of endeavor that contributes to the performance of marathon swimmers or to the development and status of Marathon Swimming to the world. Guesdon has dedicated 56 years to the sport as a marathon swimmer, coach, adviser, mentor, trainer, administrator, referee and visionary. Bruce Wigo explains his multi-faceted roles. “Chris masterminded the design for the Olympic 10 km marathon swim. Fellow Olympic model strategists, Sid Cassidy and Dennis Miller [shown below], concurred that Chris’s blueprint of a competition distance was vital to fit the Olympic schedule with the model able to use the Olympic rowing course or similar body of water in landlocked countries. Their strategy succeeded after a 104-year absence when marathon swimming re-joined the Olympic Games in 2008. 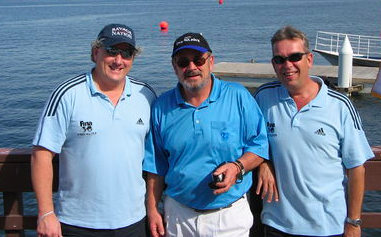