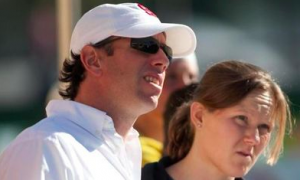 Courtesy of WOWSA, Beverly, Massachusetts “My coaching career has allowed me to chase my dreams and realize them; travel the world and learn new languages: French, German and Spanish,” said Chris Morgan who not only organizes ocean races in Massachusetts, but also serves as the head coach of Gator Swim Club and the new Boston Water Polo Club. “I am fortunate and humbled by the athletes who I have worked with and the amazing mentors who have taught me invaluable lessons and bestowed upon me treasures of information and knowledge. When I started coaching under the [renowned Olympic coach] Richard Quick at Stanford University in the 1990’s, I was nervous about making mistakes, yet comforted by Richard and his preacher-like aura. Richard was a swimming genius and a magician of motivation. I remember someone once told me Richard ‘could make a rock swim…’ and I believe that to be true.” Dial forward two decades after coaching and now Morgan is not only coaching the top age group swimming team in New England, but he has also coached at the 2003, 2005 and 2007 World University Games, 2004 FINA Short-course World Championships, 2007 LEN European Championships, 2008 Beijing Olympic Games, and 2009 FINA World Championships, but has also coached Olympians from Iceland, Switzerland and Egypt as well as age group and collegiate water polo players, channel swimmers while organizing the New England Open Water Swimming Association, the Beverly Shark Swim and the Gloucester Clean Harbor Swim, a landmark environmental swim that has produced outstanding results. It is rare – perhaps unique – that an Olympic swim coach also coaches masters swimmers, para swimmers, high school and collegiate water polo players, and organizes ocean swims and teaches KAATSU Aqua to professional athletes and special (military) operators. Most recently, his fastest high school swimmer, Andrew Matejka who will swim at Stanford University next season, competed in the USA Swimming National Open Water Swimming Championships. “His network of aquatic and tactical athletes nearly covers the entire aquatic spectrum,” noted Steven Munatones. “But his vast knowledge of human physiology enables him to break down movement in water in efficient components. Therefore, whether an athlete is preparing for a marathon swim, racing a short ocean swim, focusing on 50m sprints or distance pool races, a Paralympic swimmer with cerebral palsy or an MIT water polo player competing in the American collegiate program, Chris develops a dynamic program to get his athletes prepared for whatever they face.” Morgan recalls his mentor Olympic coach Richard Quick, “One thing that Richard was always keen about was new and innovative tools that could help athletes get better. I am sure that some of that passion for new information was implanted in my ‘swim coach’ genetic code.” “Yes, Chris always seeks out and utilizes the latest methodologies and most effective methods for training the body and mind – while incorporating all kinds of recovery and rehabilitation modalities,” commented Munatones. “Whether the water is salty or chlorinated, warm and protected by lane lines indoors or cold and turbulent outside, Chris knows his stuff like few others.” Copyright © 2008-2019 by World Open Water Swimming Association